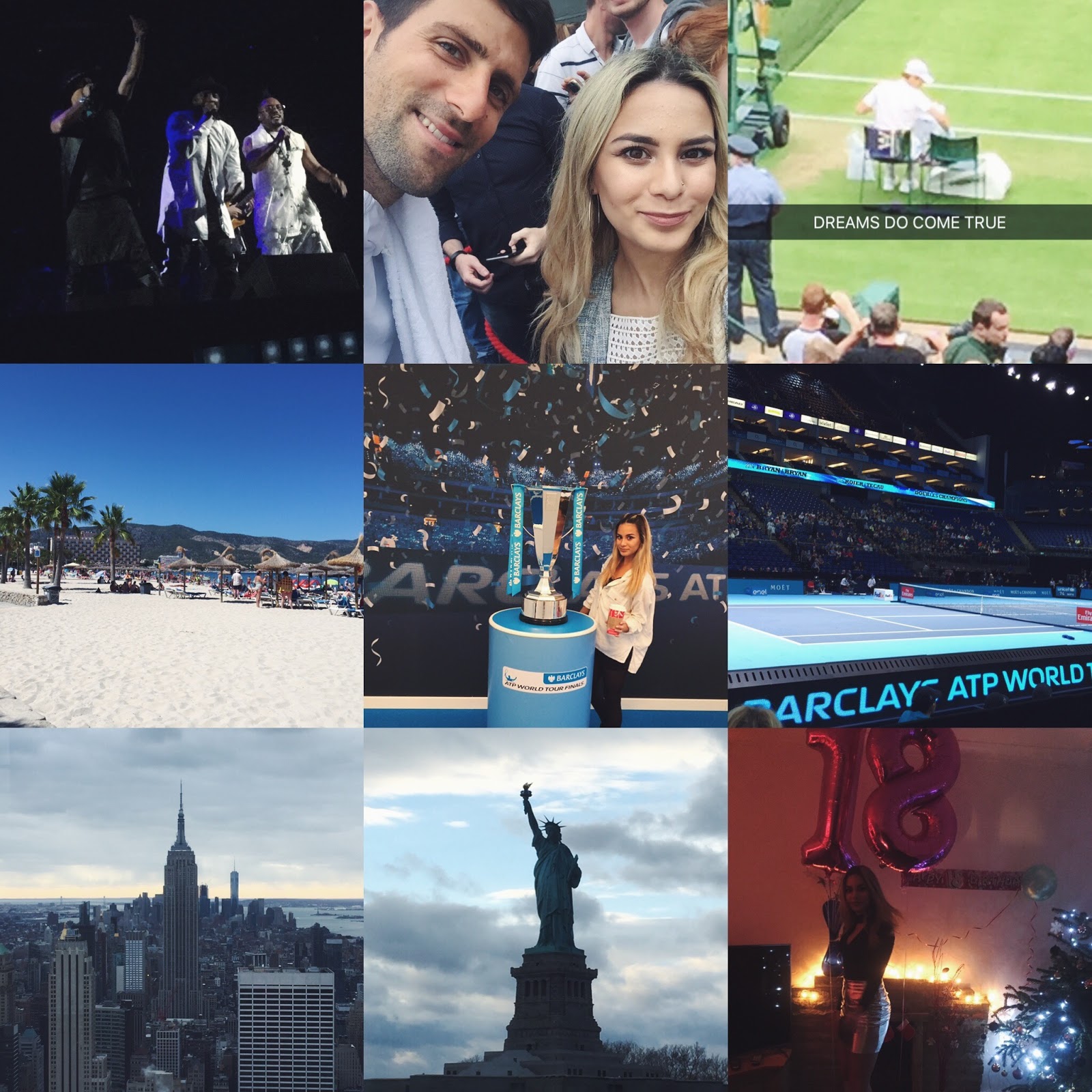 Happy New Year! We’ve got a bit of a new year, new me situation on the blog. Evidently last year wasn’t my blogging year but that’s what I really want to change this year. So I’m going all out, new blog theme, new ideas and, starting asap rocky, a new schedule. I’m v excited for this year on yasminstefanie! I decided to add a lovely little round up of my favourite memories from 2016 as the pic for this post, I put it on Twitter this morning and thought it would be a nice addition to this favourites post to also share my fave memories in photo form.

This time last year I compiled together a list of my absolute favourite things from 2015. Beauty, fashion, music, the lot. I wanted to do the same again for 2016 because there were so many things and so many people I adored all of last year that they deserve a mention so hopefully you can fall in love too.

Urban Decay Naked Ultimate Basics Palette – The palette of dreams was released in 2016. I’m a huge fan of Urban Decay eyeshadows, I’ve never found any that come close to the quality, pigmentation and lasting power of UD eyeshadows and I love my Naked palettes, especially my little Naked Basics. Being a matte eyeshadow gyal and having the Naked Basics as my favourite palette, I was maybe a bit too excited for the Ultimate Basics to come out and when it did it quickly became my favourite. Twelve matte shades in colours I absolutely love to wear – browns, pinks, smokier tones. You can create so many looks from this one palette and as a bonus it has the best mirror I’ve ever seen in a palette. It’s big enough to be really good to do your makeup in front of but not too big that it makes the palette and effort to carry around. The beautiful rusty colour, Extra Bitter, triggered my love affair for red-brown toned eyeshadows and is the one eyeshadow I always get compliments on.

Anastasia Beverly Hills Dipbrow Pomade – Last year I mentioned my love for MAC’s version of this but realised that I’d been buying a way too light shade of the MAC option which made my eyebrows look atrocious, let’s not pretend. If I’m honest, I’m not a big fan of MAC anymore. I’ve not bought from them since their Ellie Goulding collection came out at the end of 2015. So when I realised I needed a darker brow pomade I knew that ABH was the way to go. Everyone raved about this in 2015 and I was late to the party but glad to have even been invited because my brows actually looked good in 2016! This product works wonders and you can make your brows look nice and natural or use it to get that ‘Instagram brow’ look. I like to opt for something a bit in between those two styles and I have Anastasia to thank.

BECCA Liquid Shimmering Skin Perfectors – Everyone champions Becca Champagne Pop (the powder version) and rightly so. I love it. I’m more of a cream and liquid girl day to day though, I only use powder products for special occasions. I got the Liquid version of the Shimmering Skin Perfector in Opal back in March because Champagne Pop wasn’t available in liquid form back then but managed to get the Champagne Pop version at the end of the year in New York after it had come out. I love this product in either shade so much. You can use it as a base, you can mix it with foundation, you can use it as a normal liquid highlight. It’s like the MAC Strobe Cream but way better. I rate the liquid version of this over the powder. Being a lover of glowy skin this is the perfect product for me. Oh, and it’s great to look more alive and awake when you’re hungover too.

Clinique Moisture Surge Extended Thirst Relief – I’ve gone on about this countless times during 2016 so I’m not gonna bang on about it, if you want an in depth review I posted one here. This works wonders for my dry skin without feeling thick and heavy, it’s become my holy grail.

Brandy Melville – I’ve always loved Brandy Melville clothes whenever I’ve seen them in American YouTube hauls so you can imagine my excitement to finally go to a Brandy store in New York. I know there’s one in London and a small stand in Topshop Oxford Street but I hadn’t been to the store before and used to be way too short for their one size fits all sizing in Topshop. When I went in New York after a traumatic experience on the Subway I felt like I was in heaven and I was really shocked to fit their clothes considering I’m barely 5’3 with the shortest torso ever and long legs. I dropped all the $$$ in New York and loved it so much that less than a month later I dropped more £££ at their Topshop Oxford Street stand. Brandy Melville has become my favourite high street store and I’m going to order lots more online when I get the chance. Their clothes feel like great quality, especially for the price point, and they offer amazing staple pieces for your wardrobe. I’ve worn at least one of my Brandy items almost everyday since I got back from New York a month and a half ago and I have no regrets.

Zara – 2016 was the year I became a Zara gyal. There were months where the only place I spent my money was Zara and it became my go-to for basics, light knits and jackets. Their plain tshirts and vests are my favourite basic tops on the highstreet and their outerwear is so beautiful, taking runway trends and classic shapes and offering them for a lower price point whilst still looking chic. There was a time where all I wore on my top half was one of my two thin knit tops (like the one in this insta) over my favey Zara bralette. Having never been a big fan of Zara before I became well and truly hooked, and I need to go do some damage in their sales at the moment.

The Fall – I think we all know how much I love Jamie Dornan, especially if you follow me on Twitter. The Fall is one of my favourite shows and in 2016 the Paul Spector / Stella Gibson cat and mouse game finally came to an end after keeping everyone on edge for so long. If you’ve never seen The Fall, it’s a BBC drama about a murderer, and a detective who is so intent on catching him. Series three was out this Autumn and was the end of Paul Spector’s story, and it came to and end in the most unexpected way that kept you guessing until the very end and even left some unanswered questions. Sure, that sounds unsatisfying but I think it’s so clever and the best kind of way to end such an intense storyline.

A League of Their Own – Ok, I was so late to the party on this one. So late. And I regret it but I’ve made up for lost time on this one. If you know me, you know I’m now literally addicted to ALOTO. I watched half an episode from series 8 when it was re run one night in September and then saw that series 11 was starting so I watched the whole thing, got box sets and watched every single episode on there. This has become one of my favourite shows because it’s too funny. I just love it, I don’t think a day has gone by lately where I’ve not watched at least one episode. I love it so much that I nabbed myself a ticket to see Jack Whitehall in Brighton this month and you know this girl gonna be in the studio audience next series. If you don’t watch this where have you been? Because where was I for the six years I wasn’t watching it? (Tbh I was in Australia for part of that but still)

Anthropoid – Another Jamie acting performance. Can you blame me? Anthropoid is hands down the best movie I’ve ever seen. That doesn’t sound like a great achievement considering I’m not a movie person and I’ve not seen that many movies in my lifetime but this beats everything. It’s based on a true story about Operation Anthropoid during WW2, and if you’re not a fan of historical, true story movies don’t let that stop you. I don’t do many movies, and I really don’t do movies of this genre but oh lord did this movie get to me. Admittedly, I just went for Jamie but by the end of the movie my friend and I were in tears, it was such a moving story and portrayed so well by the cast and the movie’s writers. The ending scenes are extremely intense and a sudden shock after the long build up of events. Don’t expect a happy ending from this one but expect to be touched and moved for days after. The DVD is out on the 16th and I’m so excited, I’m getting it as soon as I can get my hands on it and watching it again because it is so wonderfully portrayed. There is nothing I recommend more in this favourites.

Starboy, The Weeknd – My favourite album of the year. Possibly my new favourite album of all time. I’ve barely listened to anything else since this album came out, it’s just been on repeat 24/7. There’s not a single song I don’t love on this album and I wouldn’t be able to even give you a top three of my fave songs from Starboy because I have so many. I can’t say more than how much I love this and how amazing it is. It’s not a surprise at all that The Weeknd was my most played artist on Spotify this year.

Joanne, Lady Gaga – My number one came back with a new album this year and it exceeded all expectations. When Perfect Illusion came out I was blown away and then the rest of the album followed not long after and pretty much took my breath away. When it comes down to it, there is nobody I love more than Gaga. She really is the Queen of Pop and Joanne is the most beautiful album. Way, way, way worth the long wait. I’m in love.

Cheat Codes – I discovered Cheat Codes this year and fell in love instantly. I spent my whole Summer listening to the same four songs of theirs on repeat and Sex became my new absolute favourite song. I did a whole Spotlight On post on them which you can read here to save me banging on about them for ages again. I love finding new music and discovering Cheat Codes in 2016 was a delight.

So those were my absolute favourite things and people in 2016. I truly love every single thing mentioned in this yearly round up of favourites and I hope you discover something new to love from here too because everything is so amazing and I can’t recommend it all enough.