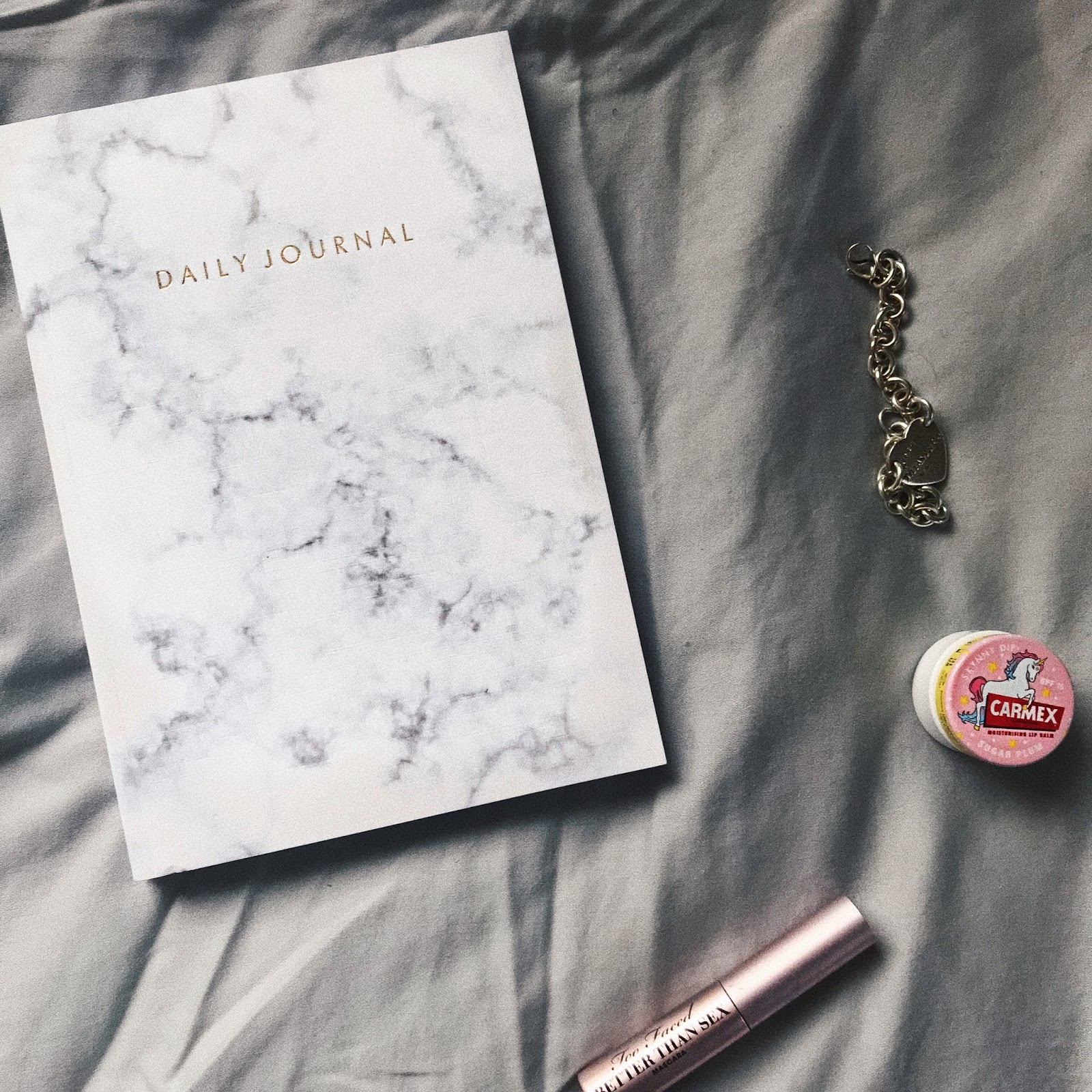 Hello, hello, hello! Happy almost 2018, craAzy that I’m even saying that. I remember once it got to 2013 the years started to sound unnatural because they got so high, and I’ve felt the same every year since. The older I get, the faster time goes, and I’m finally at the age where I actually want it to slow down and to stay this young 5eva instead of itching to grow up and be an adult.

What often comes with a new year, are resolutions and goals and plans and things to achieve. The ‘new year, new me’ trope we hear for the last week of December and first week of January ever year without fail. A whole new year seems like the perfect starting point and motivator to ~turn your life around~, strive for something better and work on your personal targets. And, with Jan 1st falling on a Monday this year, it’s a brand new week as well as a brand new year – extra motivation.

Whether or not you’re on board with the whole concept of new year’s resolutions, they’re always a fairly significant talking point at this time of year, whether you’re setting them or condemning others for setting them. I swear I see more tweets now taking the piss of those who tweet ‘new year new me x’ than actual new year new me tweets.

I like to set goals at the start of the year but I never set them in stone, if ya know what I mean. I just conjure up ideas of things I’d like to try and do in the new year, but it often never happens unless I start thinking about it or working towards it a few weeks before. And that’s sorta what happened this year, albeit unintentionally. I had some uni deadlines in December for which I somehow adopted a work ethic I’d never had before, I wasn’t procrastinating anywhere near as much as I used to and once I started doing work I didn’t stop, after finishing essays I wasn’t giving myself a well-earned break, I was writing blog posts, editing photos and queuing social media posts. And I’m still doing all that over the holidays now that the deadlines are over. And I’m loving it.

At the end of November, a few of us on my uni course went to a journo networking day at a nearby uni and it was such a motivator and eye-opener, and I’ve had an even bigger hunger to achieve my career goals ever since. I want to take every opportunity to lay out the foundations for my future career, find all the work experience I can and work my arse off to get where I want to be in the future.

ANYWAY, my point is that if you’re not someone who can solely be motivated by that fact that it is a new year alone to achieve goals, it may be better to either start getting into the swing of things in December (hard, I know, with all the festivities on your mind instead) or reflect on the past few weeks and see if there’s something you can carry forward into the new year instead of shock therapy-ing yourself with 10 super sudden changes.

Starting to get in the swing of things in December is hard. Especially if your goal is one centred around fitness and health. The best thing to remember here is to not beat yourself up over all the food you ate and/or the lack of exercise you did in December. Because you shouldn’t ever feel food guilt. My one tip for a heath and fitness focused resolution (and for life) is to never ever feel food guilt, and to never project food guilt onto others. None of that ‘here’s what food to avoid this Christmas’, ‘here’s what you should be eating in 2018’ shit. It’s more detrimental than just going with the flow and seeing what’s in the house when you’re hungry.

On a more general note, however, it’s so helpful to start subtly working towards a goal in December. Again on the fitness side, if you want to get to the gym more, go a couple times in December when it’s suuuuper empty, just to get yourself used to actually going. Lots of gyms do day passes so you could get two or three days throughout the month spread out and buy the actual membership in January when lots go on sale as part of the new year new me vibes. If you want to start posting more on your blog and properly committing to it (holla at ya girl over here) then get a few more posts up in December than you did the other months of the year, or start writing and stockpiling content to last you for the first couple months of the upcoming year.

A lot of the crash and burn results of new year’s resolutions come from forcing so much new stuff in one go when you’re not entirely ready or used to it, and you can’t take it anymore or do something too much and can’t do it anymore. Like when you eat too much of something, throw it up and never want to eat it again (me with oreo’s when I was like 12 and now I can’t eat them seven years later, lol tmi?). So ease yourself in super slowly with the odd day in December so it’s not foreign to you come January 1st.

This is also me, and this is why 2018 is the year of my career. More specifically, the year I start paving the way for my career. The work ethic I suddenly found from my assignments and deadlines in early December paired with the motivation I found from the networking day in late November are things I now already have instilled in me, so I want to really act on them from January onwards. I wouldn’t even really be having a new year’s resolution – not a proper one anyway – had I not just stumbled across this hunger in the last few weeks of 2017.

Look back on the end of the current year, have you noticed any positive changes or new feelings to succeed at something or do something specific? Even if you didn’t set out to achieve whatever it is, making it a new year’s resolution makes it pretty attainable if you’ve already subconsciously started anyway, and when a resolution is easily achieved one year it’ll motivate you for all your resolutions for years to come. Lengthy and confusing, I know, but I hope you get what I mean.

One of the best ways to set yourself up to achieve the things you want is to set yourself one simple resolution – to be happy, or even happier than you already are. It’s something that manifests itself in December because the holidays are often a time of happiness, though I understand for some it can be the total opposite if you have a bad event or memory surrounding this time of year. But, if you’re lucky enough to be one of the majority who just loves this time of year thanks to pretty lights, Christmas music and festive cheer, retain that happiness going into the new year. Keep being extra friendly with everyone you see, keep up the positive vibezzzz, keep up the happiness. If you’re happy, you’ll want to achieve your goals more, so by simply setting yourself one resolution to be happy you’ll actually be able to achieve all the other resolutions roaming around in your mind.

The most important thing to remember is that you shouldn’t feel pressured into setting any new year’s resolutions. If you’re content with how things are or happy with seeing how everything plays out rather than trying to force something, keep at it. Likewise, don’t feel pressured into keeping your ‘new year new me’ plans secret and hidden just because a few random people on Twitter got 10k RTs saying they were sick of hearing the phrase.

For me? Expect to see more on this blog. Something I H A T E saying because I say it all the time and it never, ever happens. But this time, expect it. Expect to see me sharing work I’ve done elsewhere. Expect to see me taking any opportunity that comes my way no matter what other people will think of it. And expect to see me happy.
I’ve had some potential opportunities present themselves at me already, which I will be grabbing by the horns and fighting my hardest for, and I’m super excited for you all to see the results. I am loving blogging so much at the moment, and all of the side stuff that comes with it, so I want to shift much more of my focus on it this coming year.
Some of my ‘year of my career’ resolutions are

I love that I said I don’t like setting resolutions in stone and just let them float around my head instead, and here I am declaring to the world my written down resolutions. Hypocrisy at its finest ladies and gentlemen x

Enjoy the rest of 2017 and have a happy New Year