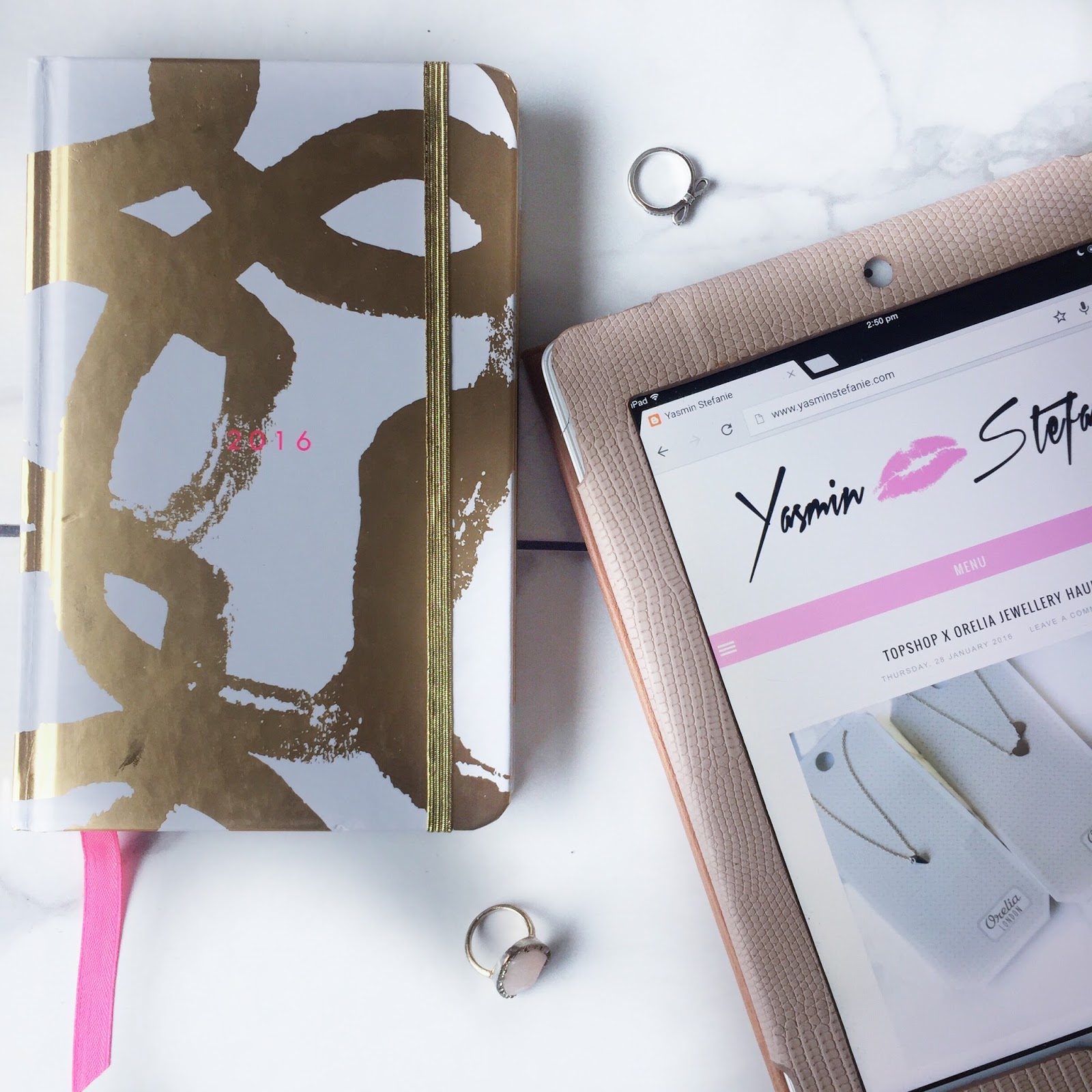 At the start of the year, on the 1st of January, I wrote a New Years Resolutions blog post and one of my resolutions was to get more organised, both with my blog and just with life in general. I feel like I’ve definitely upped my blog and YouTube organisation game since and, though I’d like to improve even more, throughout the month of January I was on top of my posts and videos, planning what was going up when and how often something would be up. I thought I’d share five of the ways I’ve stayed organised with my blog (and YouTube channel) because they’ve helped me massive amounts and I’ll still be following these tips as I continue to improve my blogging organisation even more until I have posts planned a month in advance and more regular posts too – there’s always room for improvement!

AGENDAS REALLY WORK
When I was about eleven or twelve years old I’d always watch American YouTubers or follow British blogs that all mentioned using agendas (or planners as I more often call them, though I prefer using agenda to describe the pretty, colourful ones full of more than just the dates for the year) and I always wanted one, but at that age obviously I couldn’t afford a Lilly Pulitzer agenda and shipping costs. I’ve never been one to stick to writing in agendas or planners anyway, but that all changed this year when I bought the most beautiful agenda from ban.do via ASOS and I’ve used it religiously since it came, it’s been a staple in my blog organisation. At the start of each month, there’s a notes page and I use that to write all my post and video ideas for the month, then I use the full month grid calendar to write when I want to write/film/photograph and when I want to post/upload, then I also write on the individual day in the standard diary pages that I need to do one of those things on that day and, finally, I check my planner every night to see if I have to do anything the next day and, if I do, I’ll set myself a phone reminder to do that thing the following day. Keeping your agenda colourful with stickers, the pens you use or anything else helps you use it to its full potential and you’ll be super organised!

IT’S OK TO TAKE A BREAK
You may have noticed that my blog has been a little scarce in the last two weeks (I have uploaded a video in that time which I didn’t put on here though!) and that’s because I have so much on college-wise at the moment, and throughout the whole of February. I always feel guilty af when my posts become a little less frequent but obviously I have to prioritise my A Levels over my blog so sometimes there’s nothing I can do about it. What I’ve learned over the course of last month becoming organised is that, the more you beat yourself up about posting less, the worse it’ll get. If you exude negative vibes because you’re annoyed with yourself for not posting loads for a little while, then you’ll feel too negative to then create new content and come back from that break. If you acknowledge that sometimes you can’t post as much as you’d like to and you allow yourself to take a bit of a break, you’ll end up being more organised because while you may not have time to post, you could have time to jot down ideas and then, when you aren’t as busy, you’ll have time to write up all those ideas you thought of. Plus having a little break gives you time to refresh and you might experience something new while you’re busy that will inspire a post that otherwise wouldn’t have ever been written. If you keep a positive mindset while you cannot or will not post as frequently as usual, it’ll be so much easier to come back to it and you’ll find it easy to discipline yourself into setting aside time to write, photograph, film, edit, post or upload. If you just force yourself to post for the sake of it, chances are your post will not be your best work at all and it’ll be written when you are in the wrong mindset so it could have a negative tone to it or give the wrong impression of you and the point you’re trying to make in your post – if you’re trying to make one.

TAKE INSPIRATION FROM EVERYTHING
Have you scrolled through one of those Buzzfeed gif posts and felt like you could post about the same topic but use words instead of gifs? Have you done a double-take in the street because a girl wearing a killer outfit has walked past you? Have you experience some #struggles? Have you randomly remembered an old memory? Take inspiration! Write that post using words instead of gifs and make the topic your own. Piece together your own very similar outfit and snap it for da blog. Post about those relatable struggles so people can read and laugh with you. Write a post based around that memory by taking the memory and turning it into a lesson or something that other people will be able to respond to (I’m gonna be doing a lot of this soon, based around living in ‘Straya). It’s a very cliché word of advice that every blogger is advised to do but I feel like I didn’t do it enough because I didn’t actually take inspiration from absolutely everything. I’ve been thinking about the three years I lived in Sydney quite a lot lately and it’s sparked loads of post ideas, despite being a slightly more niche topic I know it’s still going to work because it’s entirely me.

DON’T CONFORM TO ANY STANDARDS
Blogging is one of those things that anyone can do, as long as they’re passionate about it and doing it for the right reasons, and as there are so many bloggers nowadays it can be hard to differentiate yourself from the rest. However, there’s one simple way to do it and it’ll keep you more organised with posts too. Just don’t conform to what you think blogging standards are. Personally, I don’t think there are any standards anymore and you should just do what you feel like although there are obviously boundaries. In terms of building a following, it’s much easier to do if your blog can be defined (I like to call my blog a fashion, beauty and lifestyle blog because I feel like these are the topics I cover most and are most passionate about) so if you decide to define yourself as a fashion bloggers and nothing else, it’ll be slightly off brand if you start posting about what you’re feeding your pet cat. However, if you come up with an idea for a post but decide you’ll never actually publish or write it because it’s not a typical blogger post, this kills your organisation because then you’ll be trying so hard to make a post that conforms to the blogging standards that you’ve set in your head and it may be impossible for you to make the post you have in your head because you can’t afford that outfit, you haven’t travelled to that country or any other restriction. While you’re trying to hard to fit the mould and dismissing any out-of-the-box blog post ideas you have, you won’t actually be getting any posts out at all. I used to be quite guilty of this but now I know that, within certain limits, I can post about whatever the bloody hell I want and it doesn’t matter. If you don’t conform to any standards then you’ll be able to get loads more posts published and that’ll keep you organised with frequent posts.

So those are my five ways to stay organised with blogging, I hope they help you!