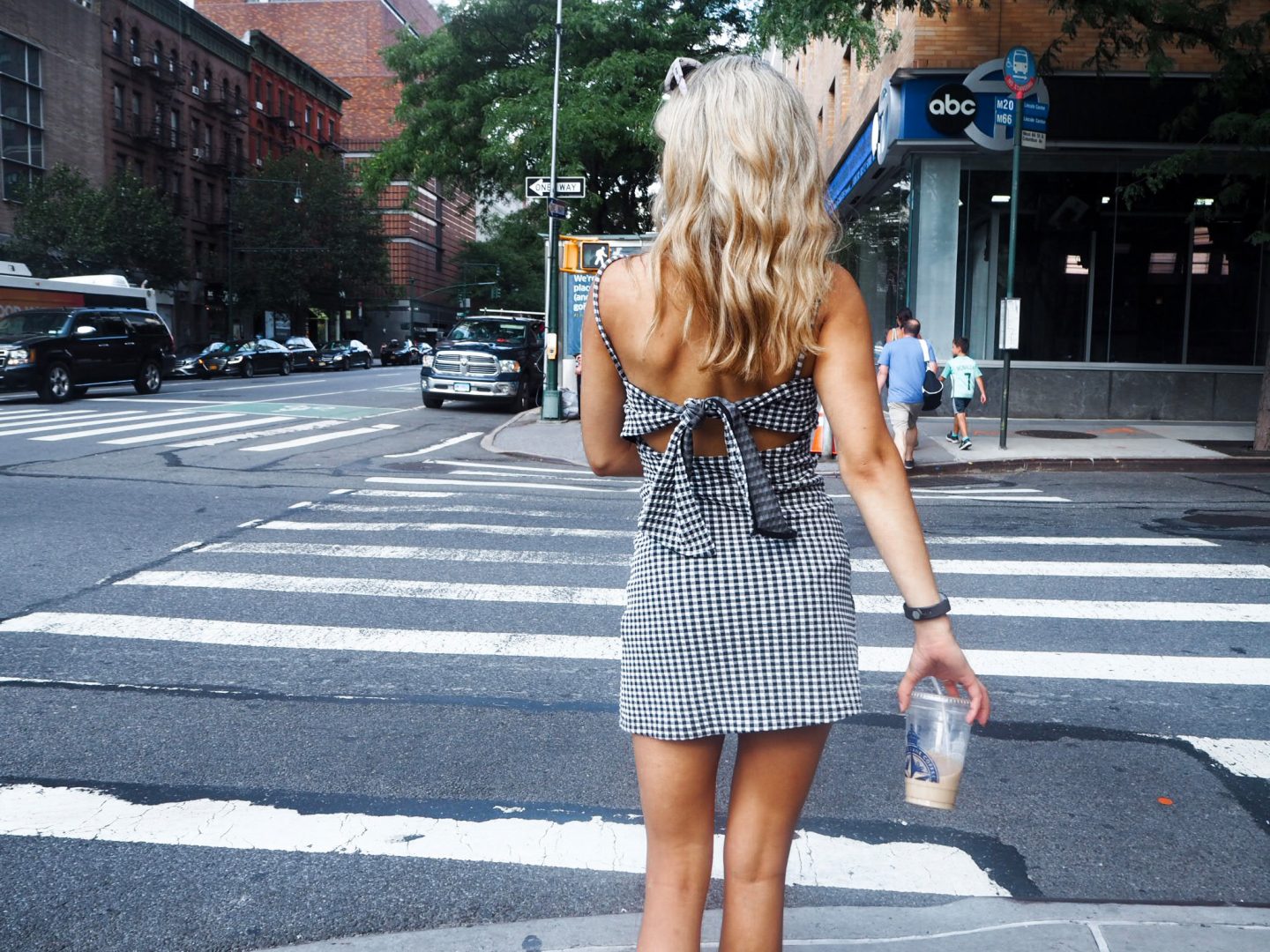 Today is World Mental Health Day, something that’s important to me every year because of the struggles I went through with it when I was about twelve. You can go through my Timehop and find countless tweets about it using the hashtag, with me stating the obvious that there shouldn’t be a stigma around it and that you should never be worried to speak out about it, and saying that (from experience) even though it doesn’t seem true when you’re struggling, things get way waaaayyy better. And it’s true, they do. Whenever I’ve told people close to me about some of the stuff I went through and did when I was really young they can’t believe it because it’s so far removed from the person I am now. So, so far removed. Because things got miles better and that’s not me anymore (I feel as though I should make the obvious lil disclaimer that if this is you, that’s absolutely fine and there’s nothing wrong with it).

Sidebar: I’ve had posts written for a couple weeks that I’ve literally not had time to get up because I don’t trust scheduling because it always messes up for me to the point that I need to be free even when something is scheduled to double check it and share it properly. One of those posts, my next one to go up after this, is about why you’re not any less hard-working if you take a break from something and in it I share a lil story about what’s been going on when I’ve been attempting to blog over the Summer and why I’ve not really been able to do it, so that’ll be up soon and you’ll understand a bit more when you read the anecdote within it, I’m not gonna share it now because it ruins a post I’ve already worked on. Lol.

Anyway, I’ve been throwing the odd hint here and there on my blog and on Twitter about how my mental health hasn’t been at its absolute best this Summer, part of why I couldn’t blog. You know what I mean, it hasn’t been awful but it hasn’t been super amazing either. And considering that right before this started I was completely normal and happy, it felt like a bit of a fall to suddenly start struggling a lil. The thing is, I haven’t wanted to open up too much about it and I probably wouldn’t be right now had I not read gracefituk‘s insta caption this morning. I might regret this blog post in an hour or so, I’m all good sharing shit about my life to strangers online but then I realise people are actually going to read it and know and I don’t want people changing their perceptions of me, because I’m still ya girl as always.

In Grace’s caption she talks about how she’s someone who will always stand up for the fact that you should be open about your mental health, not be ashamed, and feel as though you can talk about it. Except, she’s not been talking about it herself because she has internalised that she’s ‘not that type of person’, and that’s exactly how I’ve been feeling. She took the words right out of my mouth. Here’s the thing – things haven’t been really bad, ykno? I’m carrying on as normal. It’s just been literal horrific panic attacks that have come back out of nowhere, and that’s been getting me down a fair bit, but I’m dealing with it. I can snap myself back to reality when I need to, pull myself together and get on with it.

When I was way younger and struggling with stuff, it was constant and it consumed me. Sure I was only twelve but at that time it was my whole entire life and I gave into it. If you compare me now to me at twelve years old, even though I’ve had a lil wobble these last few months I’m still almost perfect right now. The difference between 19yo me having this slight dip in mental health and 12yo me being in a really bad place is that now, I don’t give into it. I’m way too proactive of a person. If I’m not happy with something, I change it straight away. I got my PT to give me a training and meal plan to get me where I wanna be because I wasn’t happy, I’ve ended things with boys because I didn’t feel amazing about myself so I wanted to invest my time on boosting my own ego rather than boosting theirs. Because I have this instilled in me now, I don’t focus on the negatives, I don’t let myself feel low, and I get on with it. I don’t tell people because I don’t want them to change their perception of me, I don’t want to be a burden, and I know that I’m focusing on changing things to make me feel happier so what’s the point to tell anyone else if I’m taking care of it already? It doesn’t mean I think there’s anything wrong with feeling down and having a dip in mental health but I know that when I’m in a situation where I’m not happy, I’ll instantly start finding way to change it and make sure I’m happy. And that’s where I don’t see a point in ever acknowledging that there was an issue for me to try and resolve in the first place.

The blog post I mentioned earlier about taking breaks that’s going up next was meant to be my starting point, my little update about why I struggled to blog over Summer and why I’m trying to come back, but I think I’ll use this as my opportunity to do those things instead. It’s not just been blogging, and it’s not just been Summer. This is something that’s been going on for a couple of months completely out of nowhere. When I say out of nowhere, I mean out of nowhere. It started the weekend after Wimbledon finished, and y’all know British grass court season is my happiest time ever. Nothing happened for things to dip, they just did. It’s been even more annoying that I don’t know why it happened and because I wanted to get everything back to perfection within a week but it’s been a couple months and it’s still not all the way back there.

So that’s where we’re at. That’s why I haven’t blogged over Summer, because I threw everything into being proactive and trying to turn things around because I wanted to feel back to my best ASAP, and because not feeling great hindered my ability to do all the things that come with blogging. I haven’t changed, I’m still ur resident queen of sass / bitch that won’t stop tweeting about tennis / gal that takes white girl street style pics, but this has also been happening behind closed doors and I’ve been putting all of my time and efforts into feeling 11/10 instead of 4/10. It serves as an explanation as to where I’ve been, but I hope also as an explanation to anyone who knows me as to why I could’ve had the odd out of character moment and seemed like I didn’t appreciate people I care about enough. I’ve just been a bit consumed with trying to turn this around quickly, and if you catch me for a chat or message mid-panic attack I will not be great to hold a conversation with and aaaaall my walls will go right up.

I didn’t want to talk about it and look weak, but if anyone else said the same thing to me I’d never doubt them for a second or think of them as weak, I just thought that would be how I’d appear if I really spoke about this properly. I felt ashamed to admit that I hit this bump in the road because it’s not me to feel low. I also thought that talking about it would make me look like things were as severe as they were seven years ago and I didn’t want people to think it was that bad, because it’s not. I’m always the last person to dwell on stuff like this so I didn’t want to speak about it thinking that it would look like I’m really out here asking for sympathy or wallowing in my own self-pity.

I want this to serve as a proper little update about why I didn’t blog – no beating around the bush and half touching on the subject like I have been. I also really don’t want to be putting out some sort of idea that my life is perfect and amazing and I’m ecstatic 24/7, I hate when people paint a false picture of their lives online and I feel like I need to be more honest across all my blog platforms.

Most importantly, I never want anyone to think that opening up about this stuff or going through it makes them weak, especially when you can’t help it. I can’t be an advocate for breaking stigma around mental health when I was too scared to open up about it myself, so I need to lead by example and swallow my pride and admit that, yeah, I’ve had some pretty bad panic attacks since the end of July and it’s been tricky. When you overcome something like I did when I was twelve, it’s disheartening to know that it’s come back years later. But there is a difference this time – I’m not giving in to it and I’m not letting it change me or affect anything I enjoy. And part of not giving in is admitting that I’ve had some wobbles recently.

Taking care of your mental health will always be something so important to me, we can only erase any stigmas surrounding it by talking about it, and we should never be hard on ourselves for having some issues with it because it’s not our fault.

and because your focus-on-the-positives gal is still here, I thought I’d end the post by sharing five things that have been makin me happy amongst all this. because we all know I love to drone on about shit I’m interested in that nobody else is x