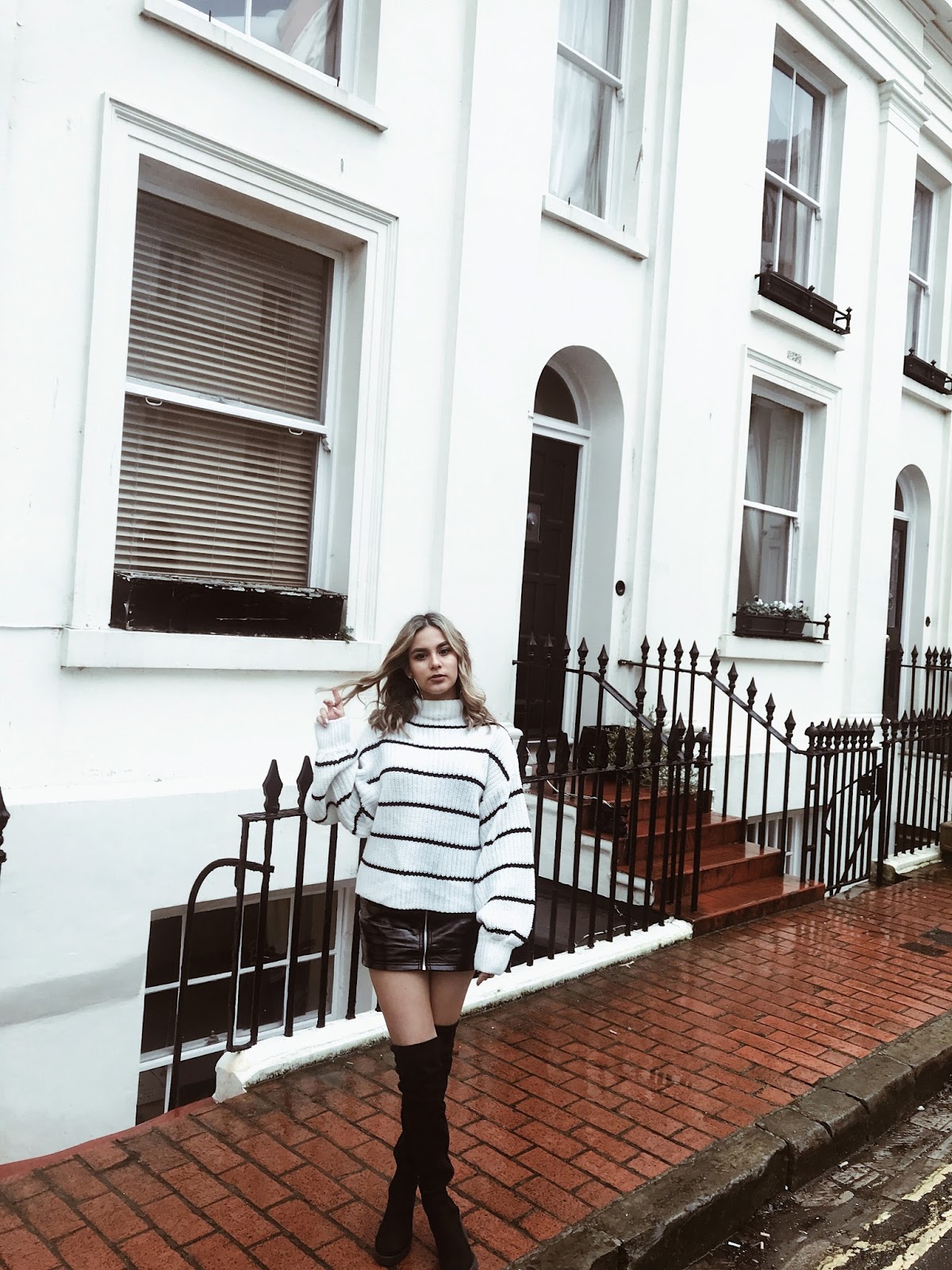 Guess who’s left this one super late to write!🙋🏼 I am not proud, it’s just a good thing that I knew exactly what I wanted to talk about in this post when I planned the idea of it. And it’s a good thing that this will be one of my more brief posts.

Ok, yes, it’s a given that you can go back on something you said. People change and grow and all that. But, like, what’s the protocol with changing your mind on a statement you made in a blog post? Must be three months later otherwise it’s not been long enough to change your mind, must never share said post on social media again, must delete post and pretend it never existed and when someone asked you where it’s gone you tell them it moved to Florida?

See, the thing about this blog post is that I planned it after writing this post, in which I disputed something I’d said in this post. I kinda wanted to go a lil more in depth about how I had a different mindset about blogging and my blog when the October post was written (I’m p sure I wrote it in early September as well) and why in my December post I no longer felt the same after re-prioritising. And now, I also don’t believe some of the stuff I said in the December post.

So, some clarifications RE these two posts in particular. The October post first. One of my tips for finding your niche or USP or whatever term I used was to ask yourself questions, with the question I asked myself being ‘what will my audience get out of this post?’ and basically I just didn’t want to publish a post if it didn’t give the reader anything or benefit them. I still like to follow this and I like to believe there’s at least a bit of that in the vast majority of my posts, however I do think this is a bit of bullshit. Write what you want to write on your blog. It’s yours. Write whatever the hell you want. I wanted to start doing monthly roundup posts, which I did. I wanted to write about my parting thoughts from the AO just because I always read Jon Wertheim’s and wanted to write down my own thoughts too. Y’all got nothing out of those, I literally just wanted to publish my thoughts about my month and about a Grand Slam. And they still did well as posts, and even if they didn’t it wouldn’t have mattered because posting them would’ve made me happy. So I dispute that.

The part of this post that I disputed in December was the part that said that I, from there on out, always wanted to write ‘Longer, lifestyle posts sort of like this one accompanied with either outfit photos or relevant other imagery that fits with the aesthetic I enjoy. I don’t want to just put up a few pics of an outfit with five sentences about it when that could be done on Insta – I want to give you, my audience, something with every single post.’ lol girl you whack af. There’s definitely been a shift towards more deep think posts to accompany fashion and personal style imagery from just chatting about your outfit, a shift I am glad has happened because these are the posts that I most enjoy reading and creating. But I disputed this in December, and still do, because at the time of writing I thought it would be a sin to do anything else, I thought I always had to have something thought-provoking and topical to talk about, and then I’d sit at my desk trying to force out something deep and meaningful to write about. Then in my December post I’d had enough, I’d hoarded my outfit photo for a month trying to think of a deep, topical post to accompany it and after badly writing some forced trash I didn’t truly care about I decided to say fuck it and instead wrote about how wrong I was to try and force it and how wrong I was to say that I was forever going to write those types of posts and nothing else. And ‘that could be done on Insta’ ok hun, calm down, a lot can be done on Insta. Micro-blogging is literally a term now for turning your caption into a mini blog post on the gram. Your point makes 0 sense, past Yasmin. I still feel the way I did in my December post about this, BUT, I also disagree with my December post. Lol.

I’m not sure it’s as much the way I wrote it as it is the way it comes across. Sometimes when I share this post on Twitter I think it gets taken in a ‘yeah fuck those deep posts talk about why you picked your jumper 5eva’ sort of way. And that’s not what I’m here for. That’s not what I believe so I don’t want it to be taken that way but I’m not going to go rewrite that post so it comes across differently because it’s not going to be an accurate reflection of what I was thinking and feeling at the time of writing, and it’s a bit fake. I will always write a think post over a why-I-styled-these-pieces-together post when I have an idea organically come to me because it’s something I’m passionate about. But also, I will never half-heartedly write about why I picked an outfit when I don’t rly care about it that much as a filler for when I can’t think of a thought provoking topic to discuss. I really bloody love the coat in my December post and had been dying to share it and couldn’t think of a think post topic so I thought ykno what, I love the coat so much that surely I should be able to just shout about that, because it’s an honest reflection on what a good coat it is and why it’s worth the price tag if it’s so loved. If I had put a photo of that coat into a think post you might’ve clicked the link, seen it was something like £80 (ok I know that’s not a lot but to broke student me it is) and thought ok bye lemme find a cheaper alternative. But by raving about the coat, you would click the link and think ok it’s expensive but it sounds worth it so I’ll get it. Ya feel?

Fighting with myself aside – it does feel like going back on something you’ve said in a blog post isn’t a discussed thing in the blogosphere. And I’m sure that’s because we all think it should just be a given, but that doesn’t take away from the feeling and the consequences of doing it. You can easily be branded a fake, get asked oh why do you think this when you thought the opposite a few months ago. Yes, as long as you and the people who care about you know the truth you shouldn’t care about what anyone else thinks, but it feels like people online are always so quick to hold others to their words. And I get this to an extent, if someone has been disrespectful in the past they should be held accountable and apologise – but we do hold them way too accountable in a lot of cases.

Public figures’ old tweets containing sexist, racist, homophobic or just not nice language are being dug up all the time lately, it seems to be the thing. And I 100% believe that it is bad that they said what they said, but if you can see that there is currently no reason to believe that they’d still think that way then once they’ve apologised why can’t it just be accepted and dropped. I will hold my hands up and say that when I was 10/11/12 I would use the word ‘gay’ to mean something that was just bad or annoying or frustrating, because that was what everyone did at school and so I thought it was the norm, and obviously you tweet the way you speak. So I’d be like oh this summer holiday is so gay because I’m so bored and have nothing to do. And now I think it’s disgusting, and as soon as I became aware of the negative effect of my language use and how associating the word ‘gay’ with something bad can associate gay people with something bad or worse still look like it means that being gay is bad, I stopped. I stopped straight away. I must’ve been around fourteen when I realised this. And let’s be real, in primary / elementary / whatever you call it school, you aren’t taught about these things. Especially in my day (wow saying that makes me feel old), even though primary school in my day was up until 2011, the world still wasn’t as PC then as it is now. You wouldn’t be taught in school that calling someone a faggot is bad because this has been used as a slur for homosexual people in the past and in some cases still is so it makes it look ok to use that sort of language. You would, at most, be told that calling someone a faggot was bad because name-calling is bad.

I digress, this is a bit unrelated to going back on something in a blog post, but you get my sentiment. People are constantly held accountable for a view that had a few weeks, a few months, a few years ago before they had a chance to grow as a person and learn. Similarly, I’ve seen people attacking bloggers and celebrities who were once vegan or vegetarian and no longer are, perhaps because their body was seeing negative effects of cutting a certain food out and the deficiency wasn’t helped by tablets. Stop holding people accountable for this stuff, if they own and accept that they no longer believe something they said in the past, or no longer label themselves something they did in the past, you need to take them for who they are now and not who they were then and accept their explanation and/or apology depending on the topic, and just let it go. This isn’t about you thinking it’s bad of them to stop being a vegan / veggie, it’s just that if they tell you they aren’t anymore despite once being one, you just have to accept it and stop telling them ‘but u said ur vegan like 2 years ago xxx’ when they’ve already clarified that they no longer are.

Am I allowed to go back on something I said in a blog post? Well I just did. But you can see why people would worry about doing so, because people are held accountable for everything these days – even after their explanations and apologies, even with no reason or evidence to believe they could still think the same. It can feel a bit ingenuine, like you feel bad for still sharing a post you don’t 100% agree with, and when people comment on it you can’t fully back up what you said in that post. In the case of my posts, they weren’t offensive, I just no longer believe them, so I see no harm in continuing to share them because they can’t be fake if they are a reflection of the way I thought at that point in time. The fake thing would be to share it and talk about it as if you still think it’s totally true.

Have you ever retracted, corrected or gone back on something you said in a blog post or on social media? And how do you feel about this whole digging-old-tweets-up game?


(I swear I said this was gonna be brief?)