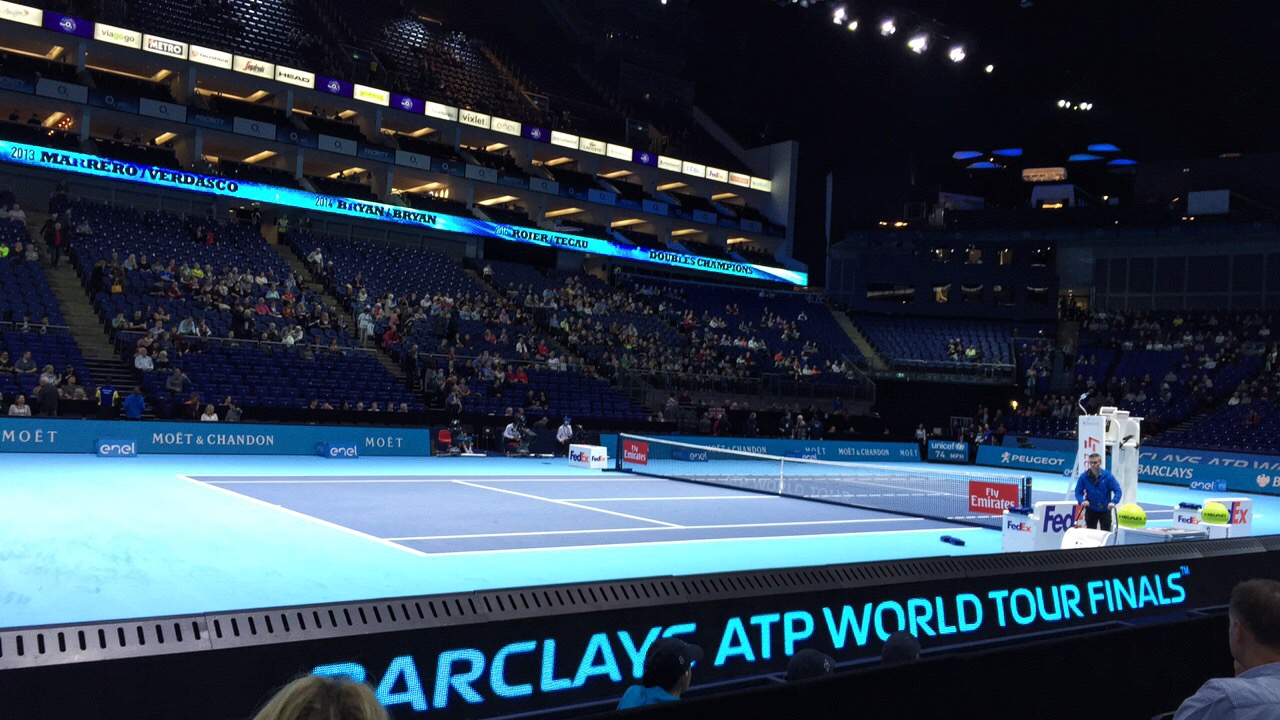 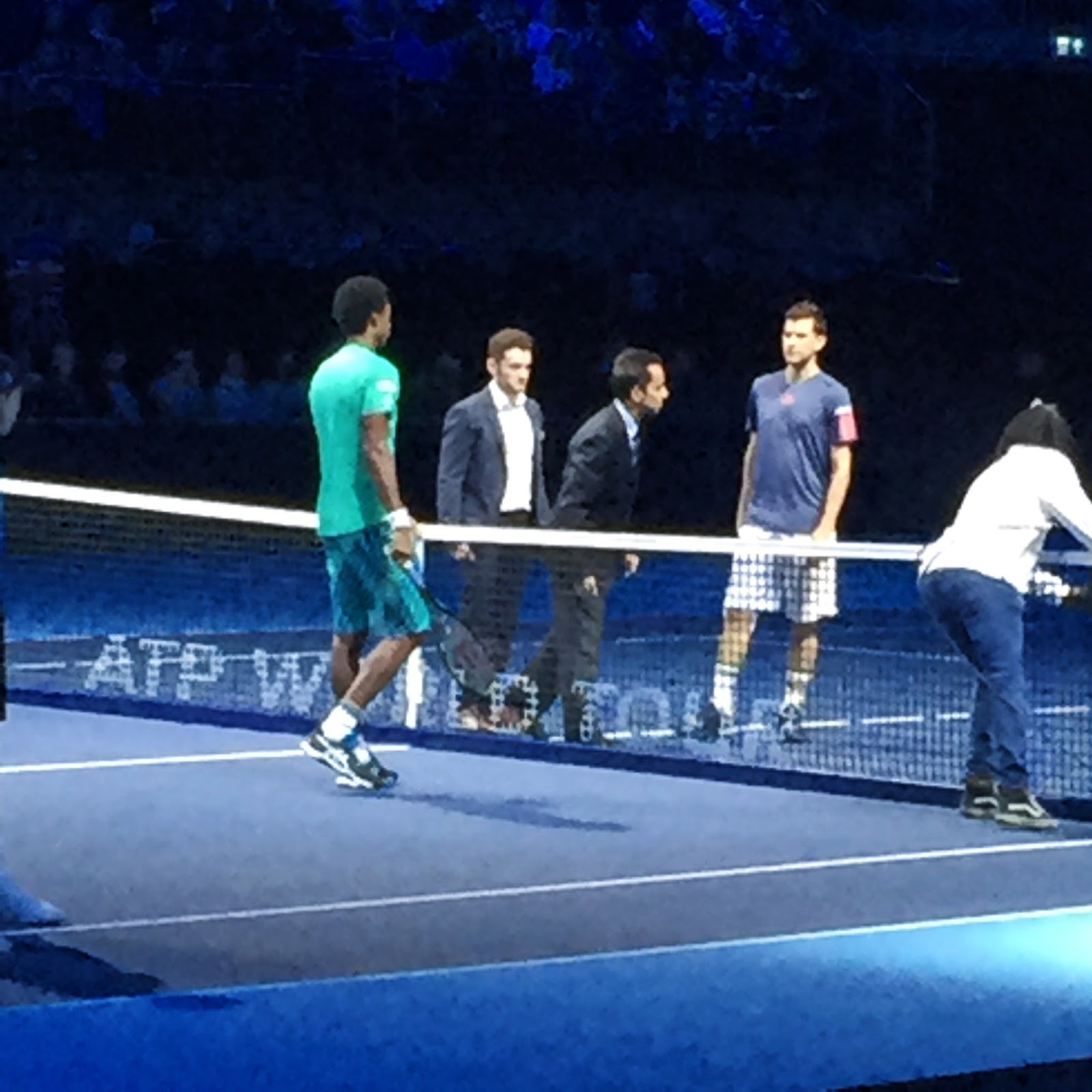 Flashback to a few months ago on my blog, I went to Wimbledon and put up a post all about it. Going to Wimbledon, or any grand slam for that matter, is a dream for anyone who loves tennis but as well as that, attending the Barclays ATP World Tour Finals has always been a dream of mine. Last year I planned all Summer long to go to the Tour Finals, looking at tickets and deciding what day and session would be best. In the end I never got to go and when I watched it on TV last year and saw that the exact session I planned to go to included a singles match between my two favourite players, Andy Murray and Stan Wawrinka, I vowed to go this year because I couldn’t sit at home watching it on TV having a bad case of FOMO. This year when it was the day of the Wimbledon final, despite my bank account taking a big blow to pay for my day 4 Wimbledon ticket, I decided that it was the perfect time to buy my Tour Finals ticket and managed to nab myself a seat in the fourth row. I’d been counting down every single day from the moment I booked it until the moment I went and to say it didn’t disappoint would be an understatement. Controversial as it may sound, I think it’s better than going to Wimbledon. 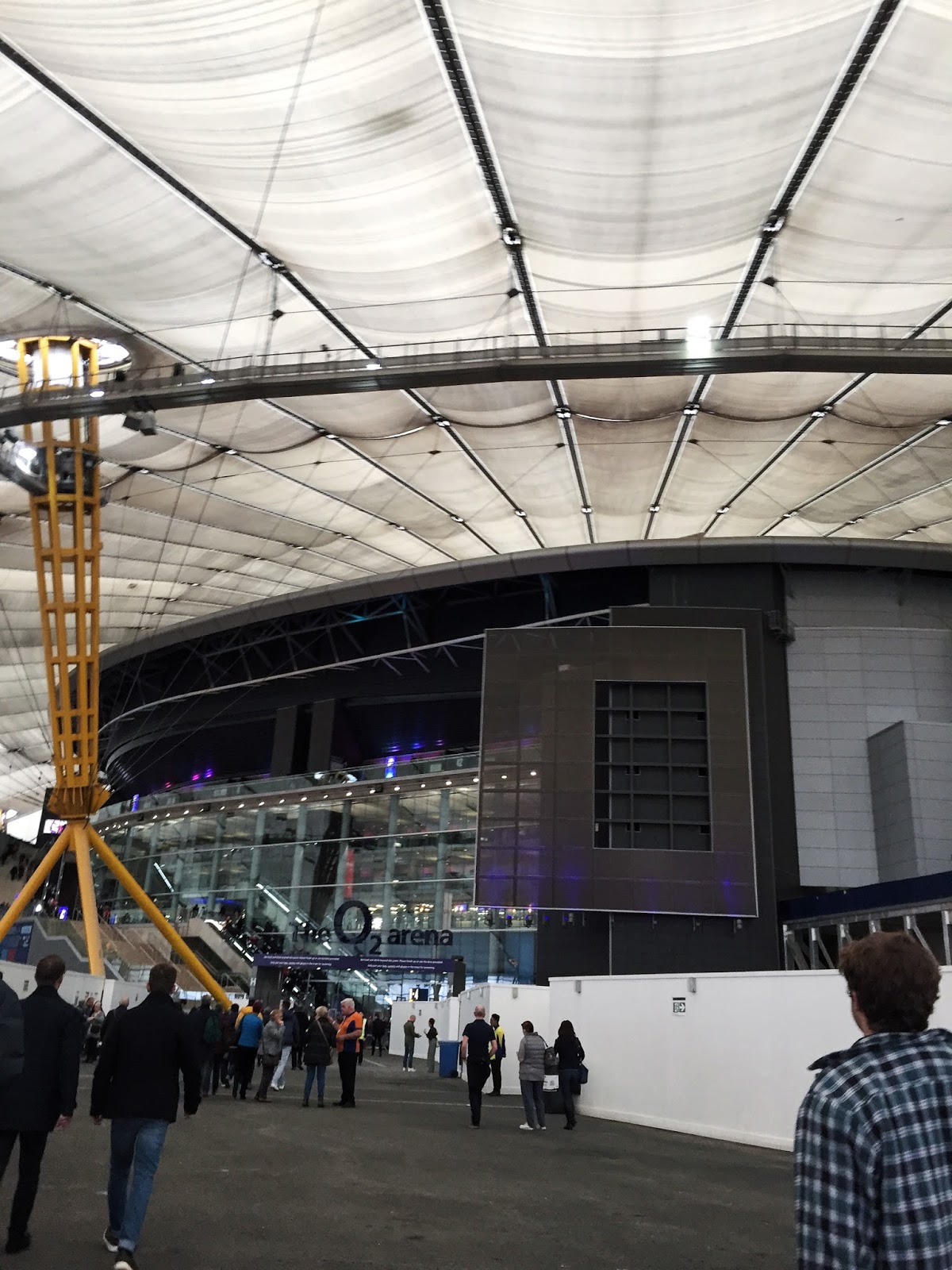 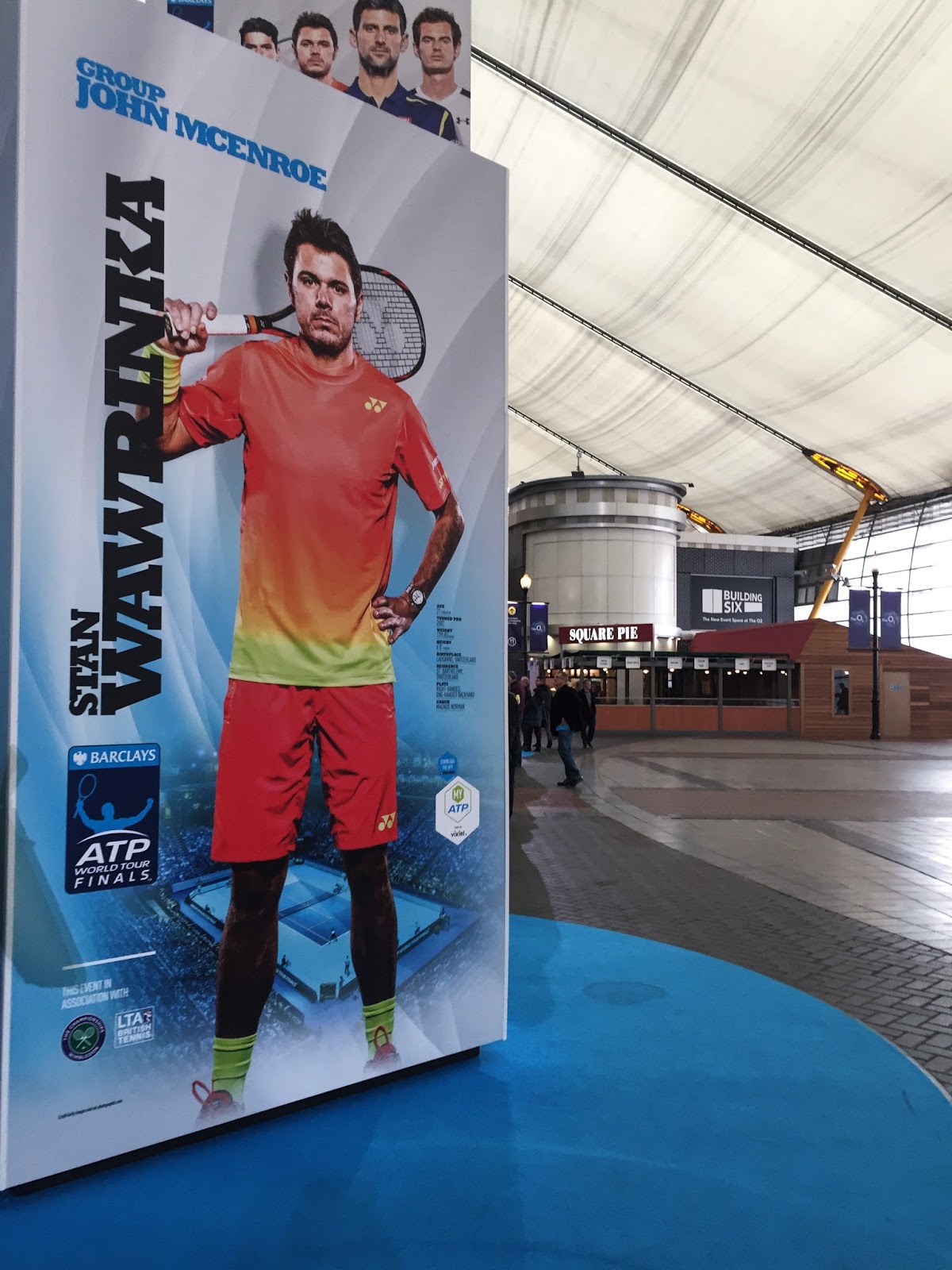 If you don’t know the tournament well, you’d probably be surprised to know that it’s held at the o2 Arena in London and has been since 2009. The o2 is my favourite concert venue and it looked absolutely beautiful as a tennis court too. It felt weird being back at the o2 since the last time I went was March 2015 and I spent my whole day queuing. It was all set up for the tennis and looked amazing!

There’s a Fan Zone halfway through the o2 as you walk through it set up especially for the Tour Finals and it’s a really snazzy feature that they bring in, with a practice court to watch the players practice before matches, where I saw Nishikori which was lovely since I also saw him at Wimbledon, and loads of stands to do things like take an ATP quiz or have a pic with the trophy which I obvs did. 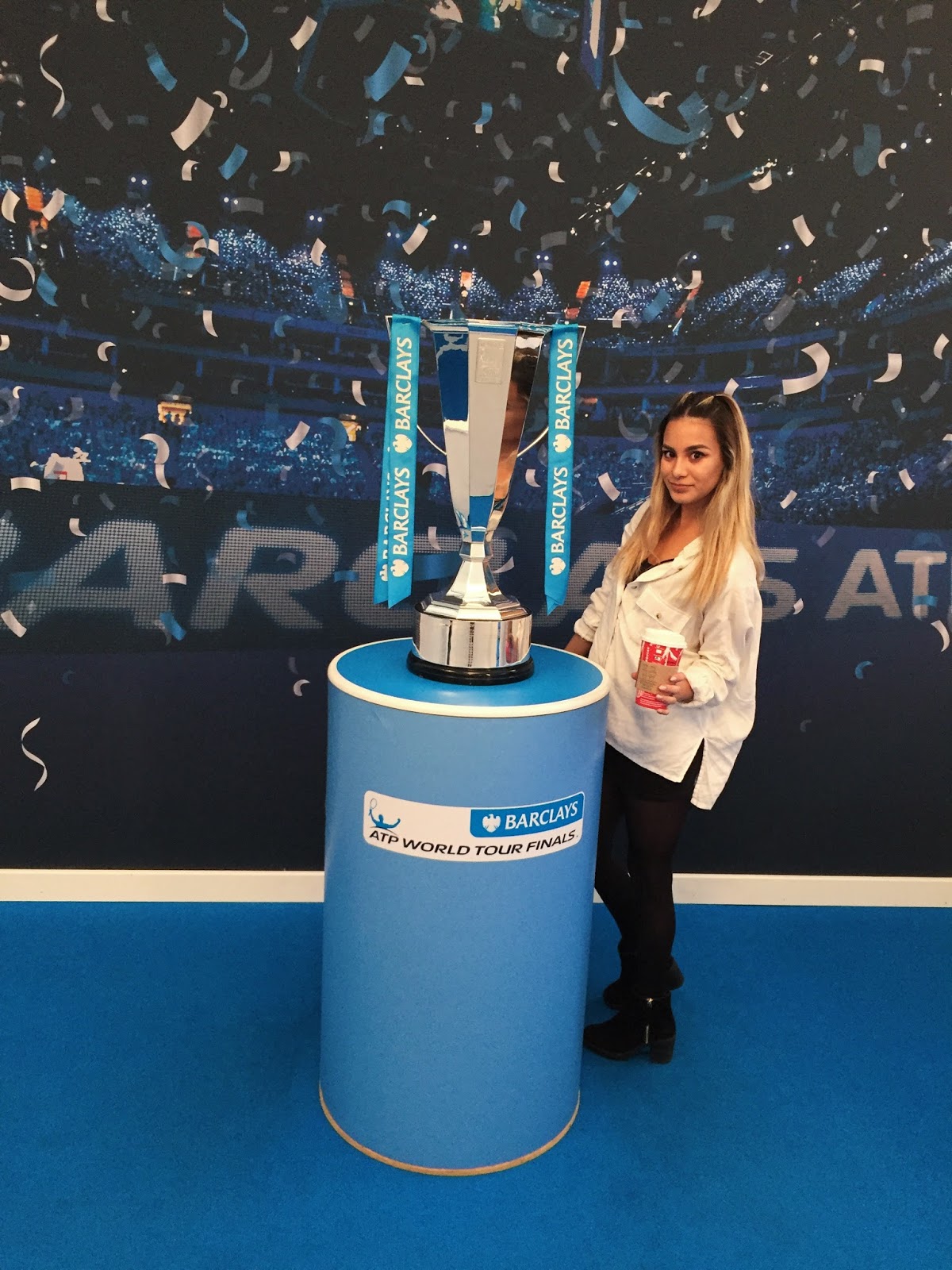 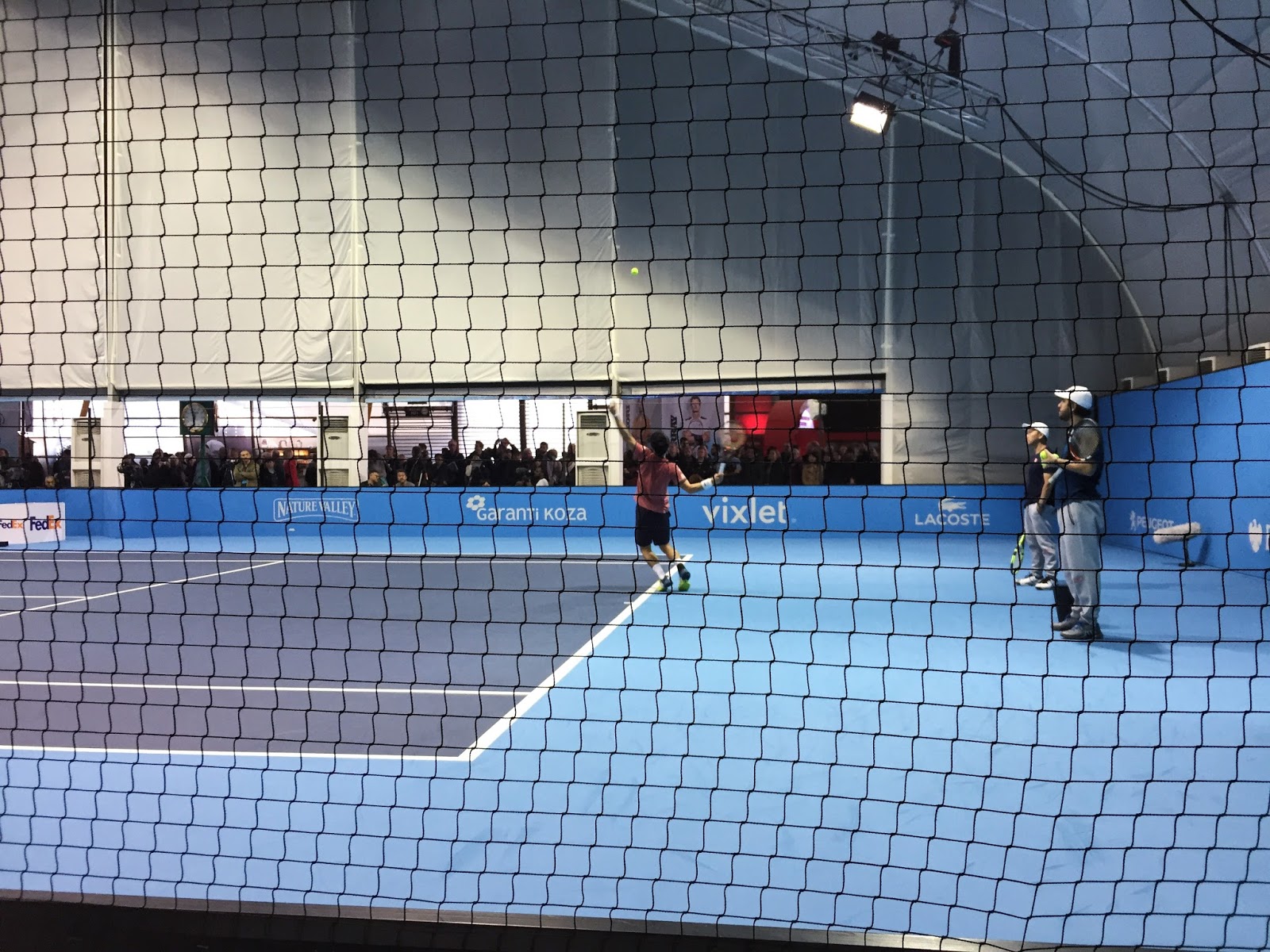 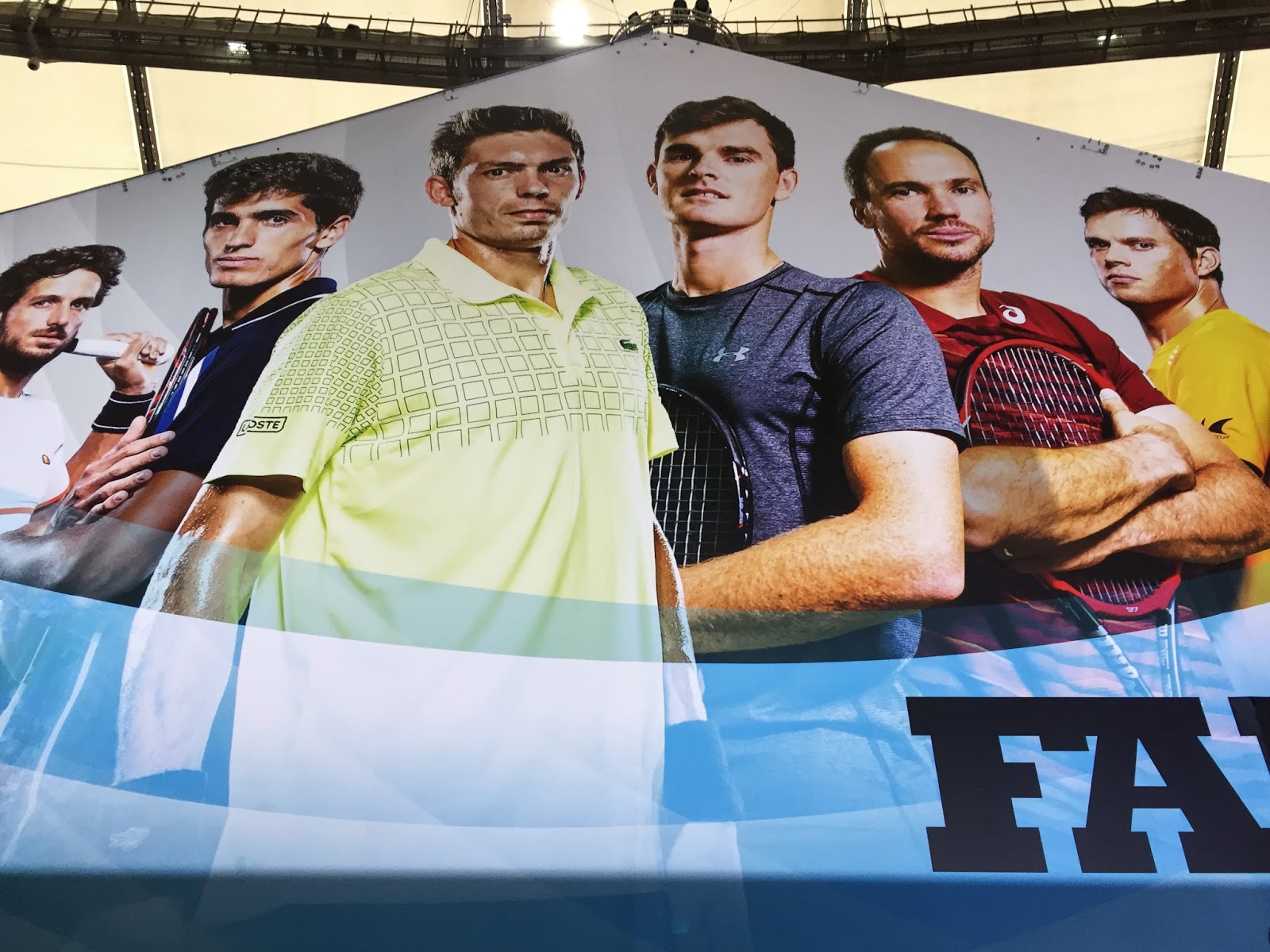 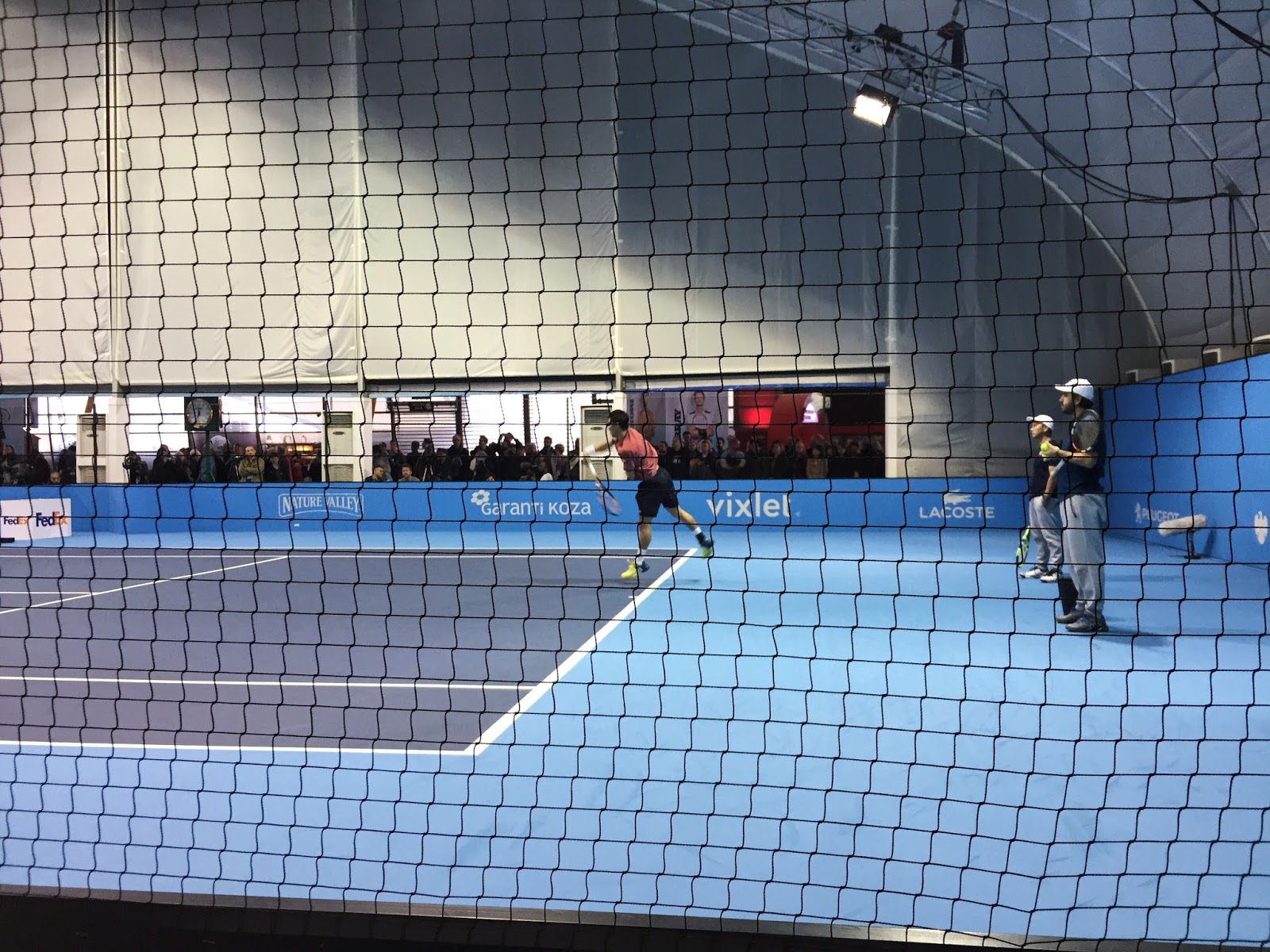 I headed to the court after checking out the fan zone because I had tickets for the afternoon session which started at 12PM with a double match between Jamie Murray and Bruno Soares against the Bryan brothers. I’ve never been into doubles but while watching Jamie and Bruno play at Wimbledon I fell in love with the way they play so when I found out that the doubles match for my session had them playing I was so excited. The Bryan brothers are also pretty iconic for doubles players in this era so I was really looking forward to the match between the two pairs. I got to the court and sat down in my seat about ten minutes before the players were due on court and I was so close to the court I could not believe it. 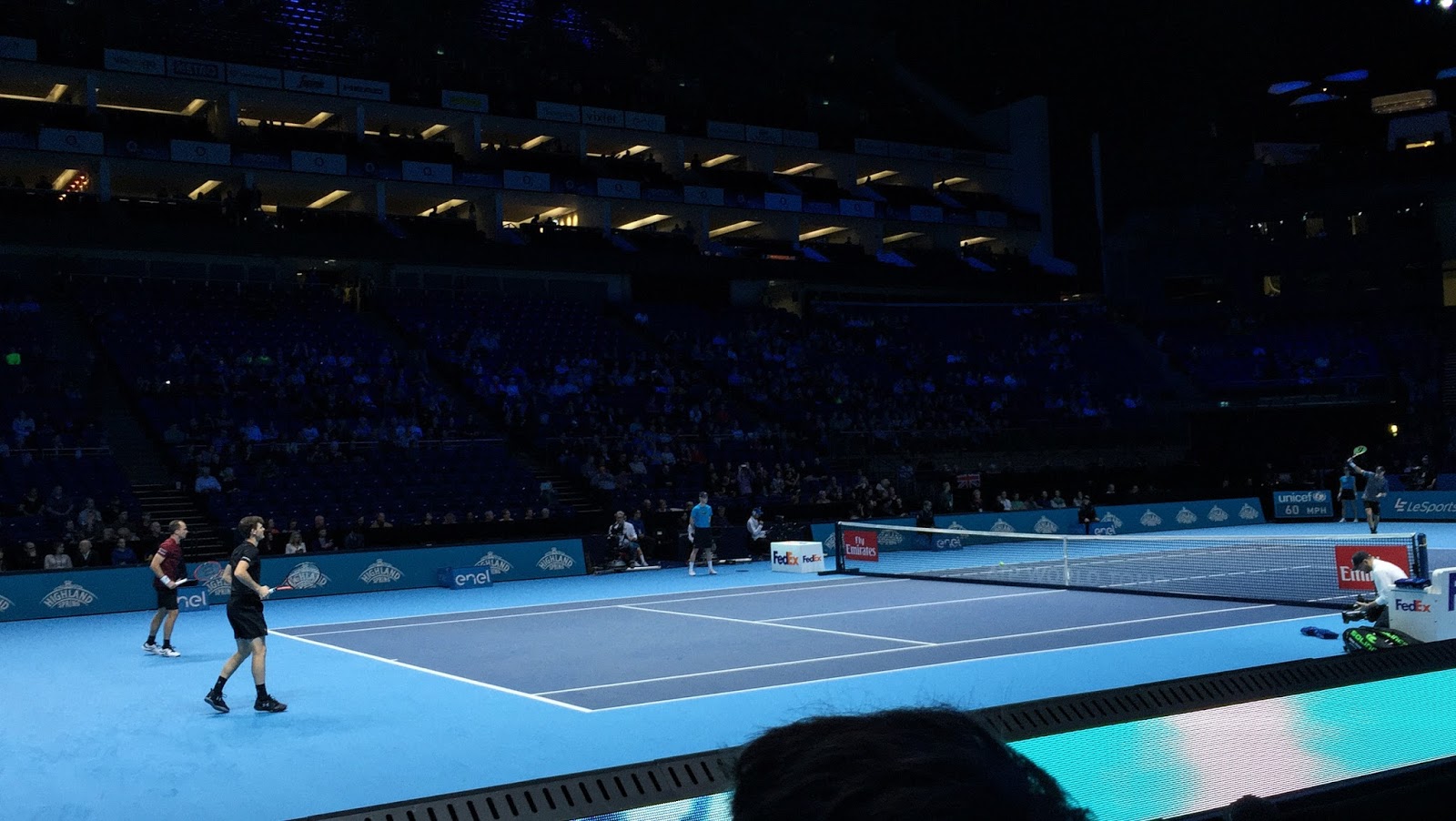 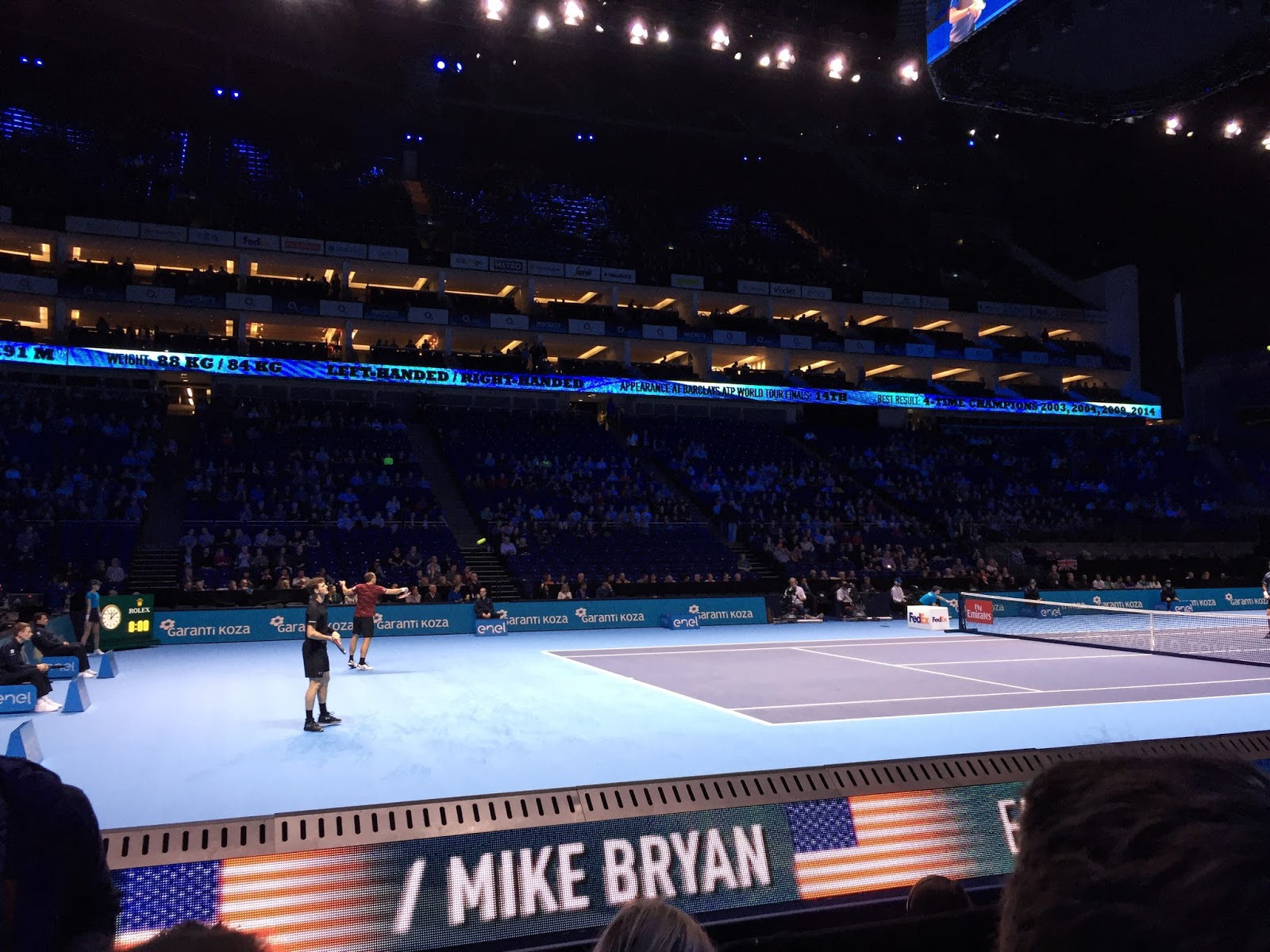 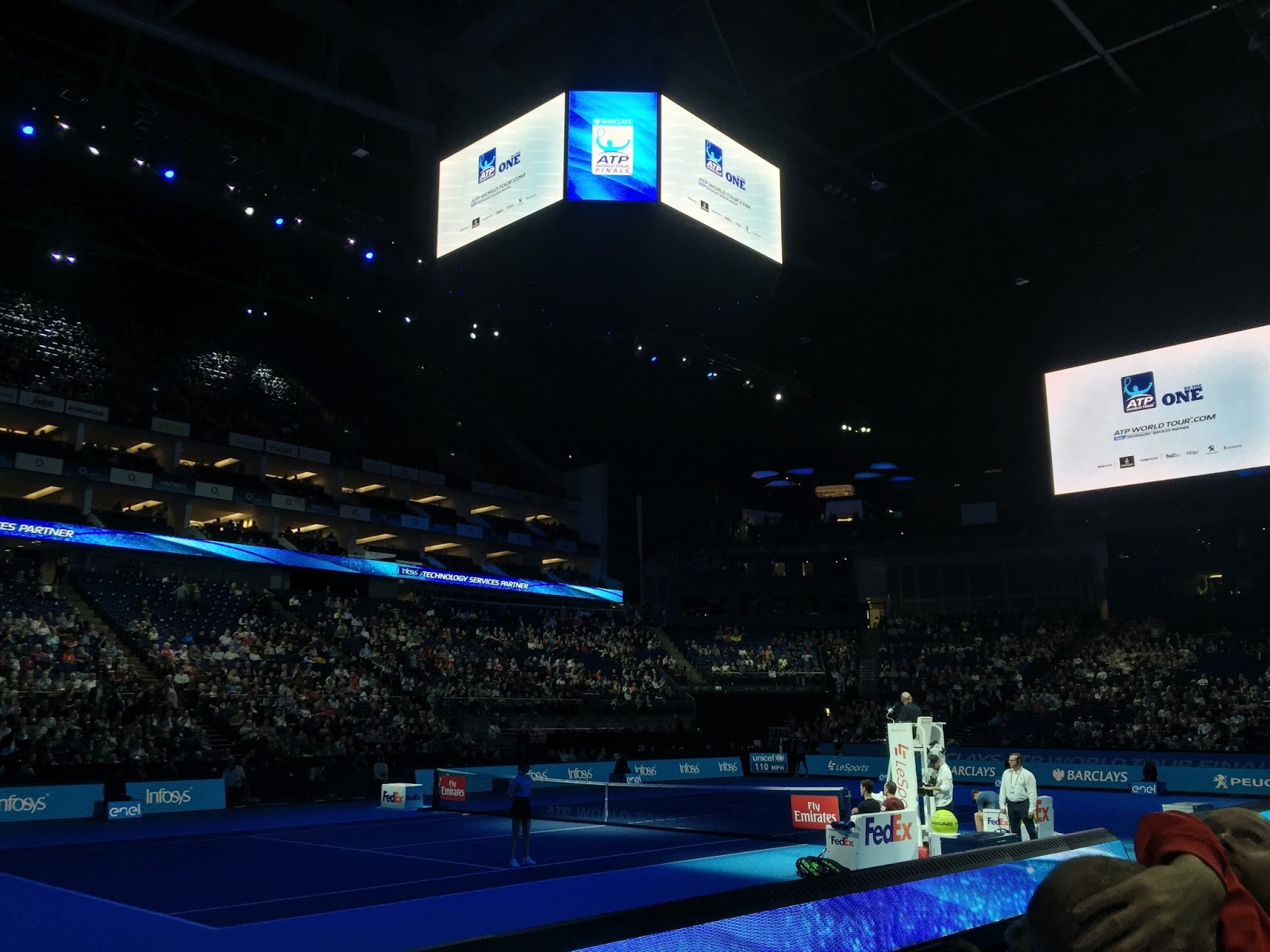 The atmosphere at the Tour Finals is amazing, they play really good music really loud. It’s much more relaxed and laidback than Wimbledon which is completely understandable, and it feels like everyone there is really into tennis and knows who the players are and how it all works as opposed to Wimbledon being a day out that people go to to experience it because it’s a big British thing. Of course there’s nothing wrong with that, but the ~vibes~ at the Tour Finals were different. When the players are coming on the lights go down and the music goes up and there’s a big build up with blue waves going across the screens in the arena. If you’ve been there or seen the start of a Tour Finals match on TV you’ll know what part I’m talking about, and I nearly cried at how surreal it felt to be sitting so close to the court with the match about to start and this big, fun build up going on. I reckon if I was going to be seeing Wawrinka or Murray in the singles I definitely would have lost it and cried. The ball kids and umpire come out before the players and there’s so much energy around the court it’s honestly the most amazing thing to experience. I was lucky enough to be sat by the corner the players came out from which only heightened the amazing feeling of being there in that moment. 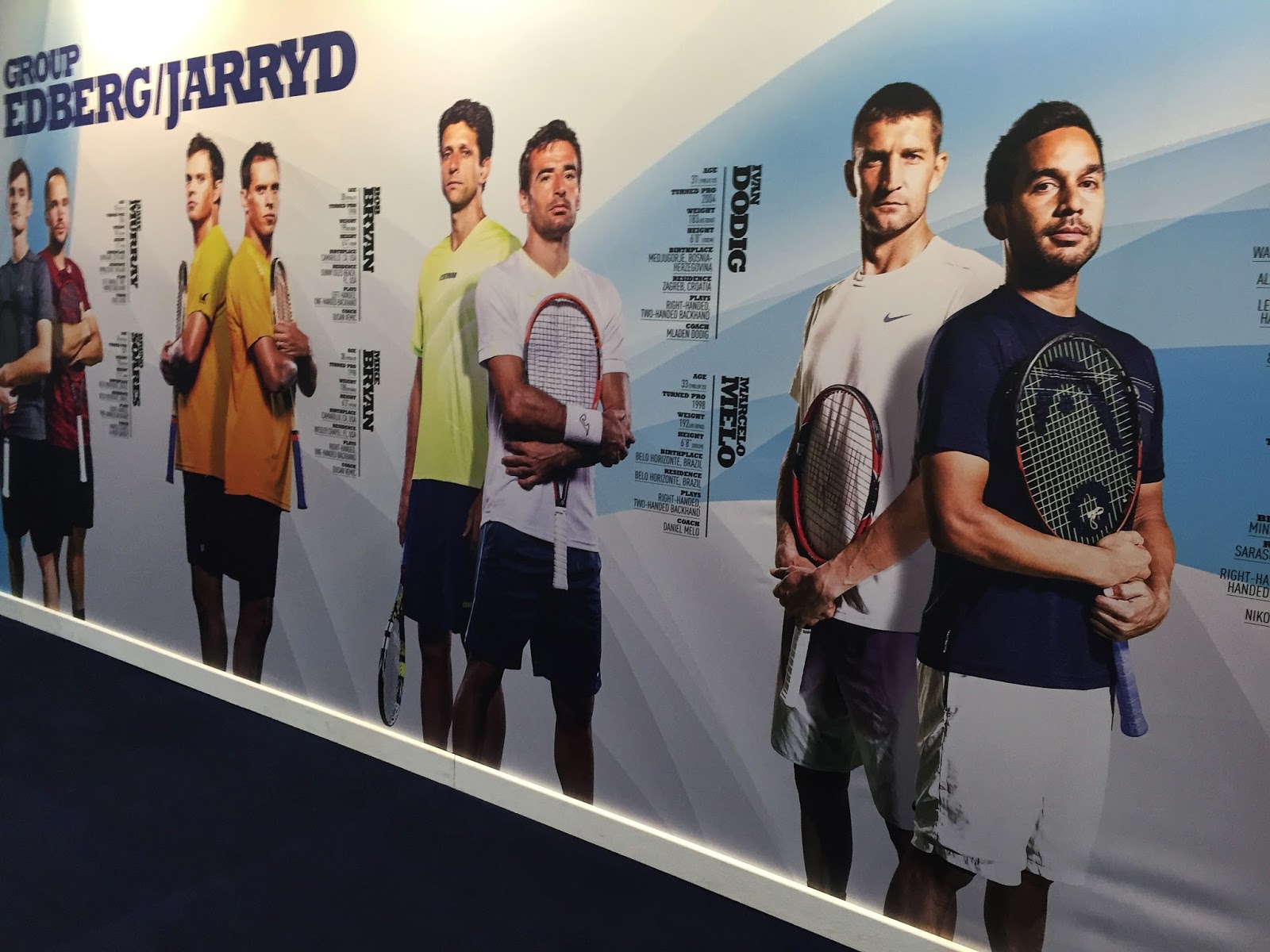 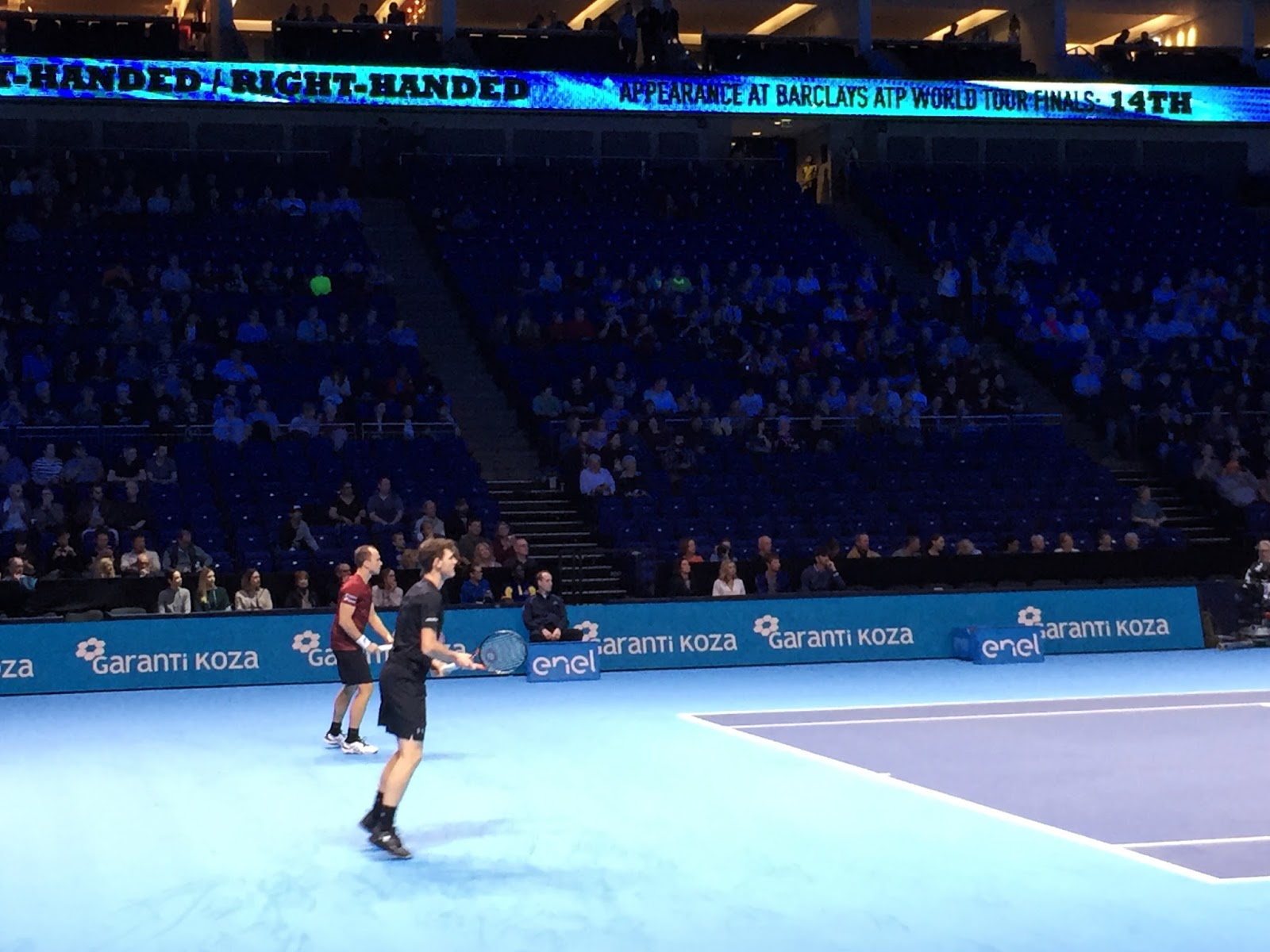 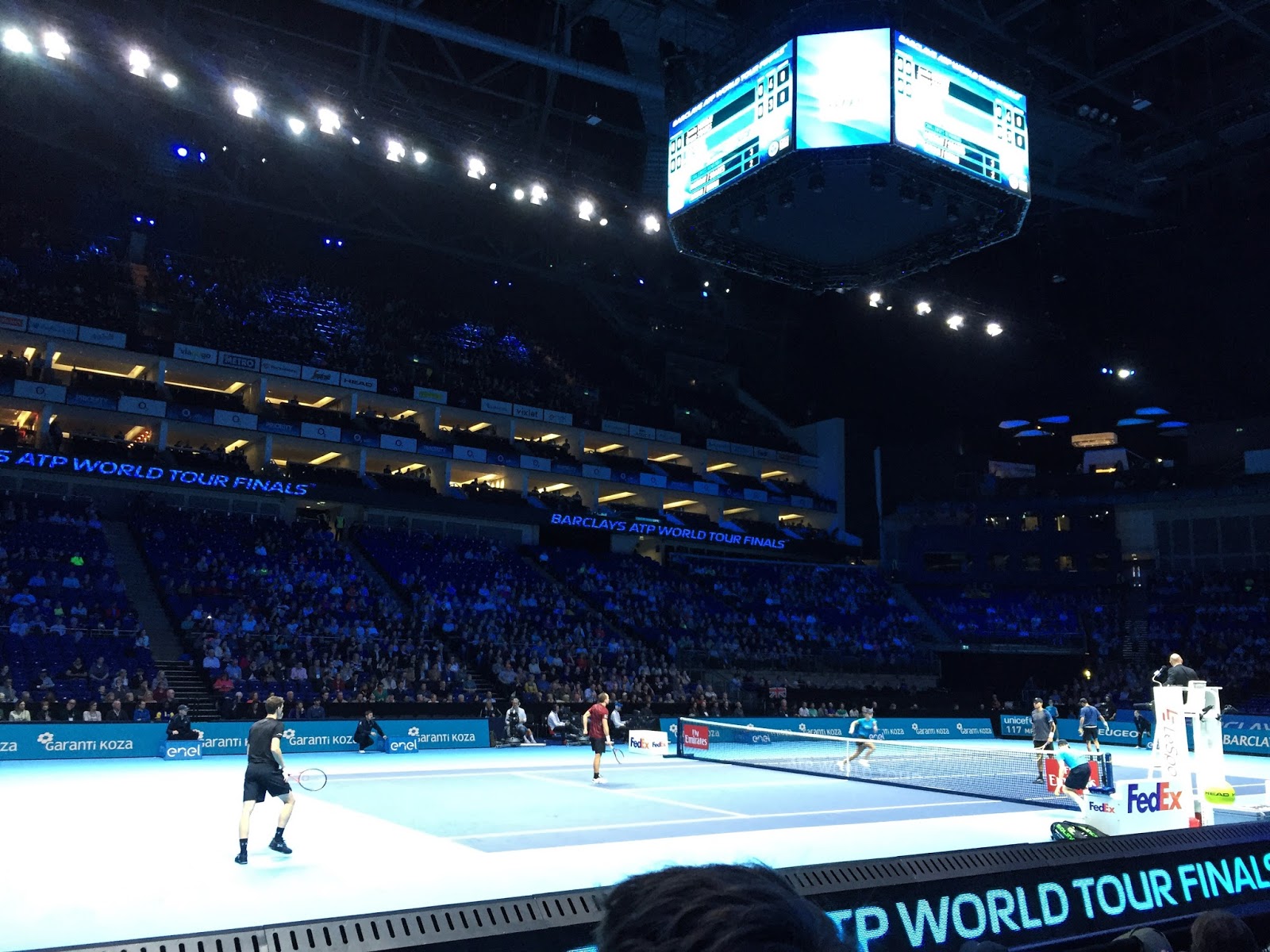 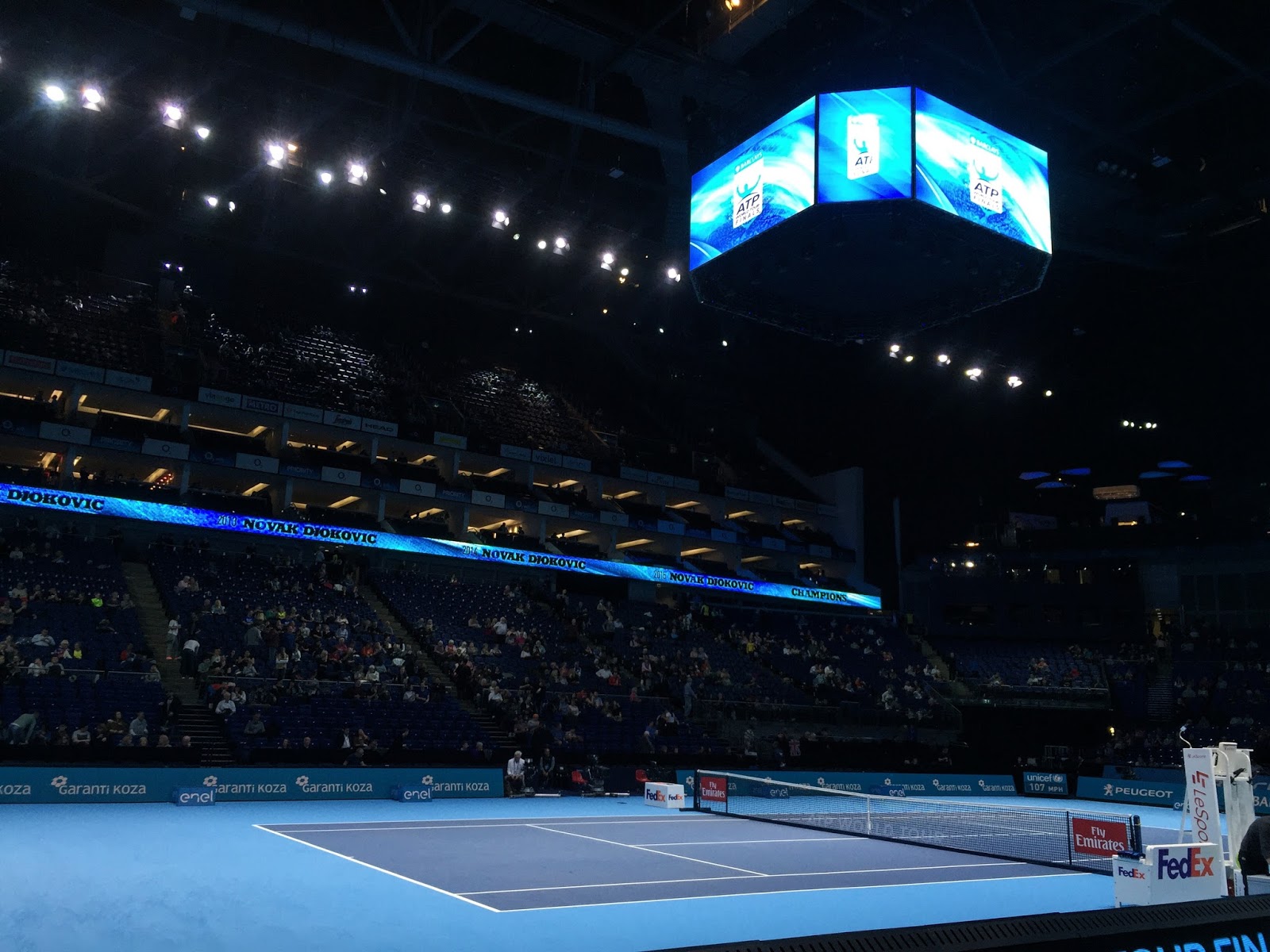 The doubles match started and you best believe this girl was backin’ Murray / Soares hard. What I loved about the changeovers, which doesn’t get shown on TV, is that they play really good music in between the games, videos of the players and show people in the audience. Murray / Soares won their match in straight sets, 6-3 6-4, which of course made me very happy. As I’m writing this post they’ve won all three of their round robin matches and gone to number 1 in the doubles rankings which is even better. The Bryan brothers handed their defeat gracefully and still signed things and took pictures with the people in the crowd. Jamie and Bruno did the same when they walked off, Jamie going to the people directly behind the court and Bruno going to the people at the side of the court, which included ya girl Yasmin! 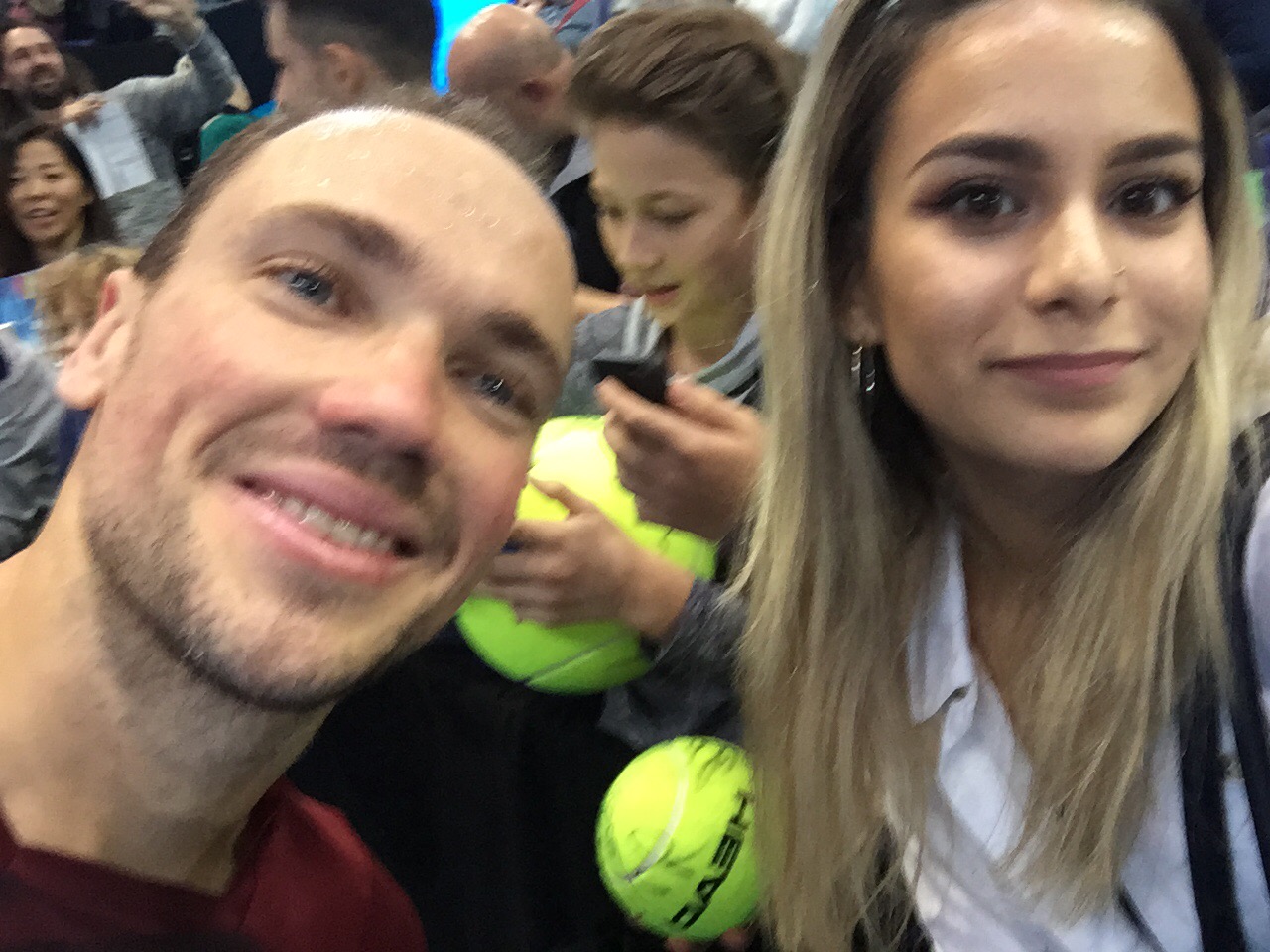 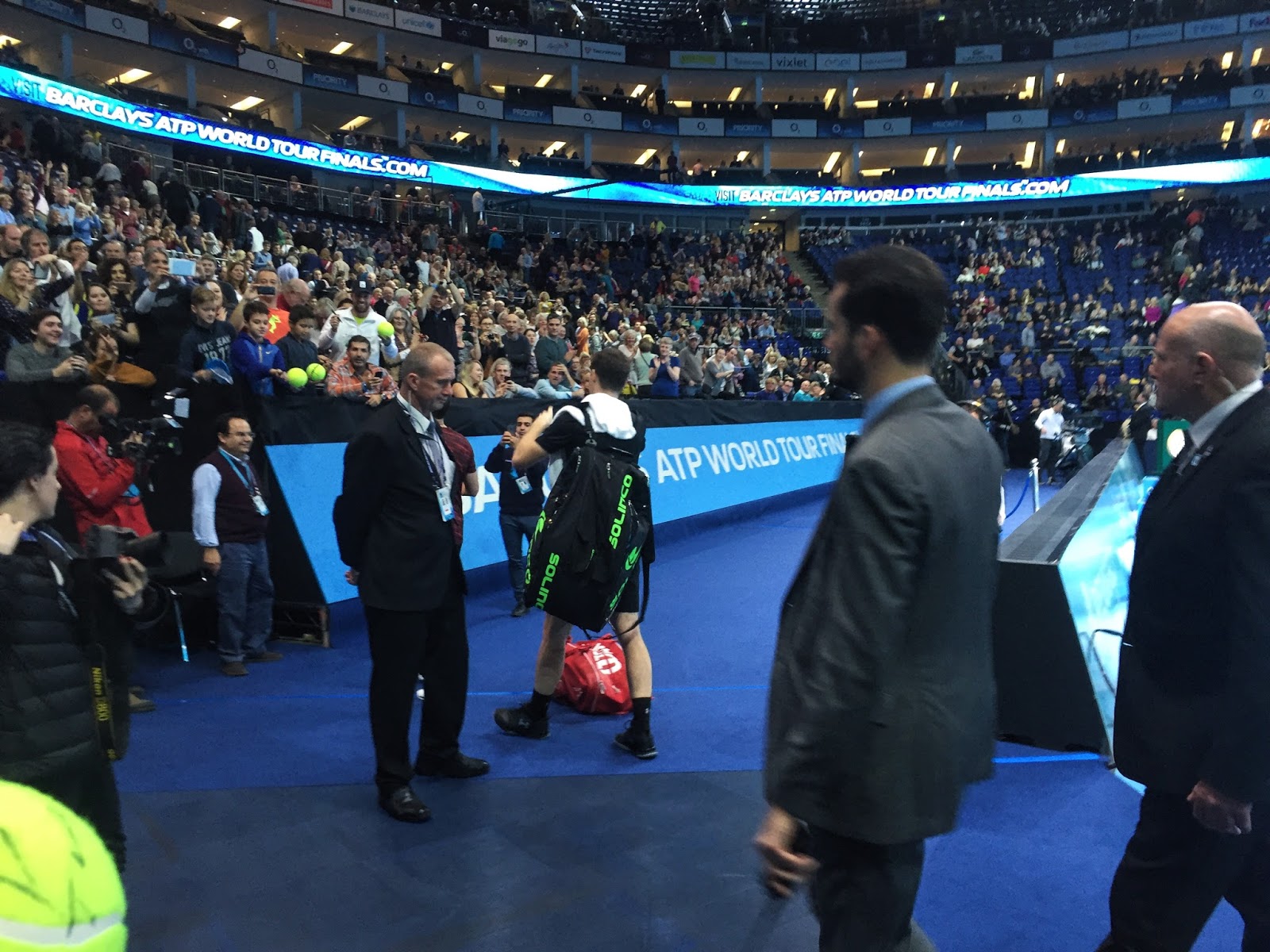 There was a bit of a wait before the singles match which was Gael Monfils and Dominic Thiem go head to head. I was backing Monfils who was wearing an odd choice of a pair of shorts, probably inspired by Cilic’s swimming trunks look the night before. The match went to three sets which prolonged the time I got to be there. Thiem took the first set 6-3 but Monfils fought back and won the second 6-1, serving a fair few aces. Thiem won in the end after winning the third and final set 6-4, although Monfils was battling an injury he’d had before which definitely must have worsened when he fell over during the match. Since then he’s pulled out of the tournament, missing his last match which would’ve been against Djokovic, meaning David Goffin got to play in his place for that match instead. I was a lil bit heartbroken that Monfils lost when he’d been playing so well in the last two sets but started wincing a bit after he fell, and even more heartbroken when he had to pull out because of his injury. 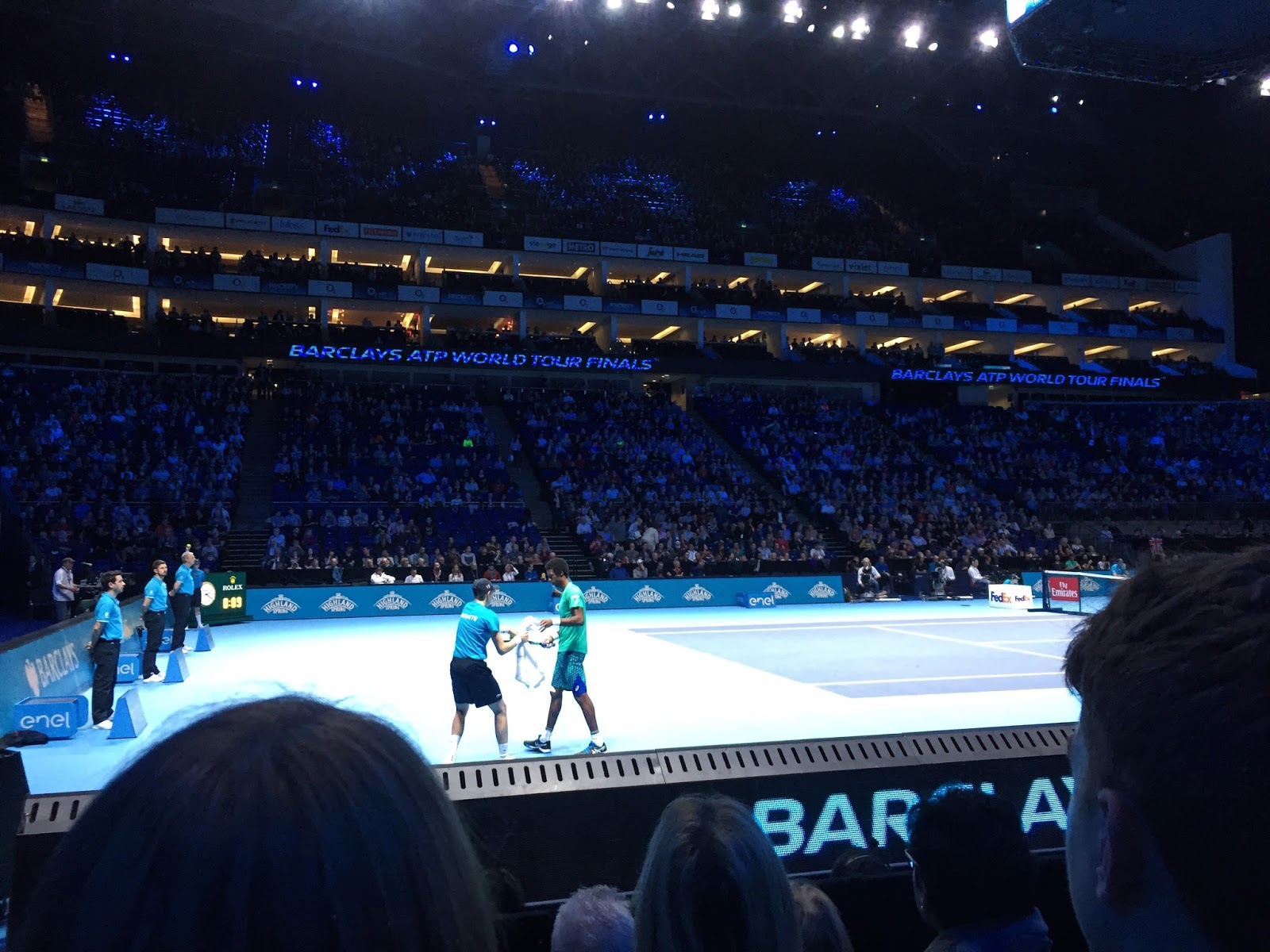 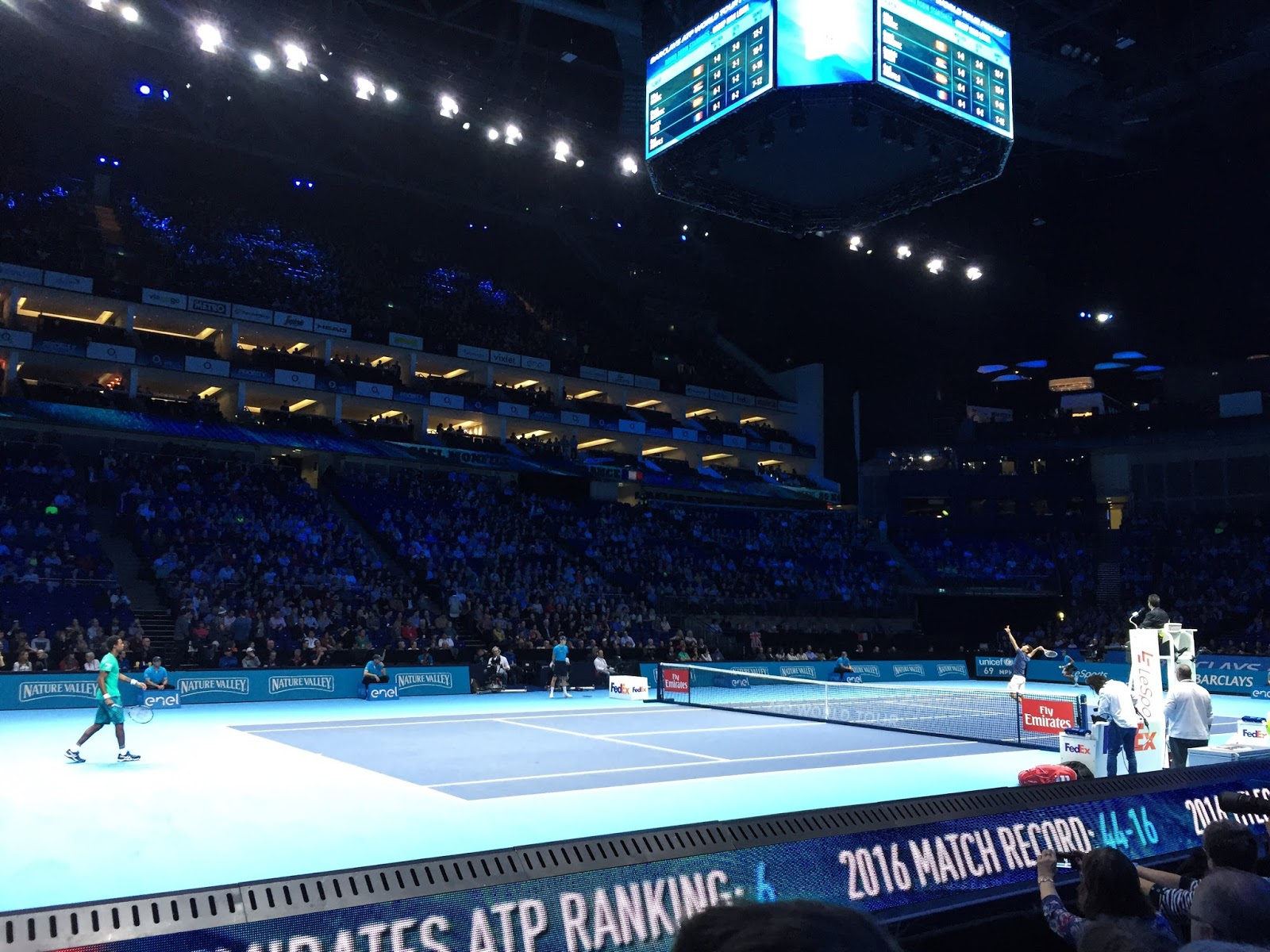 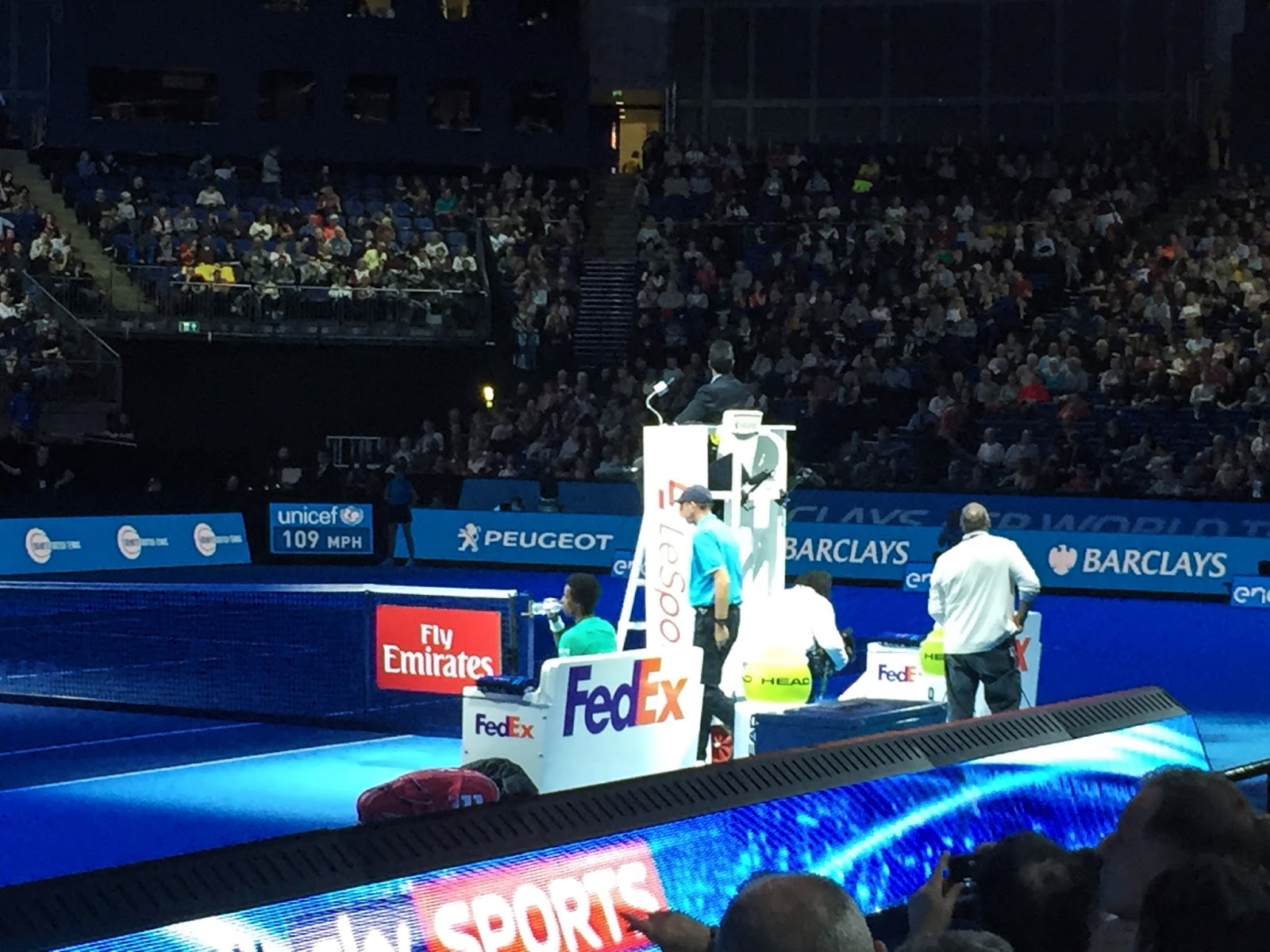 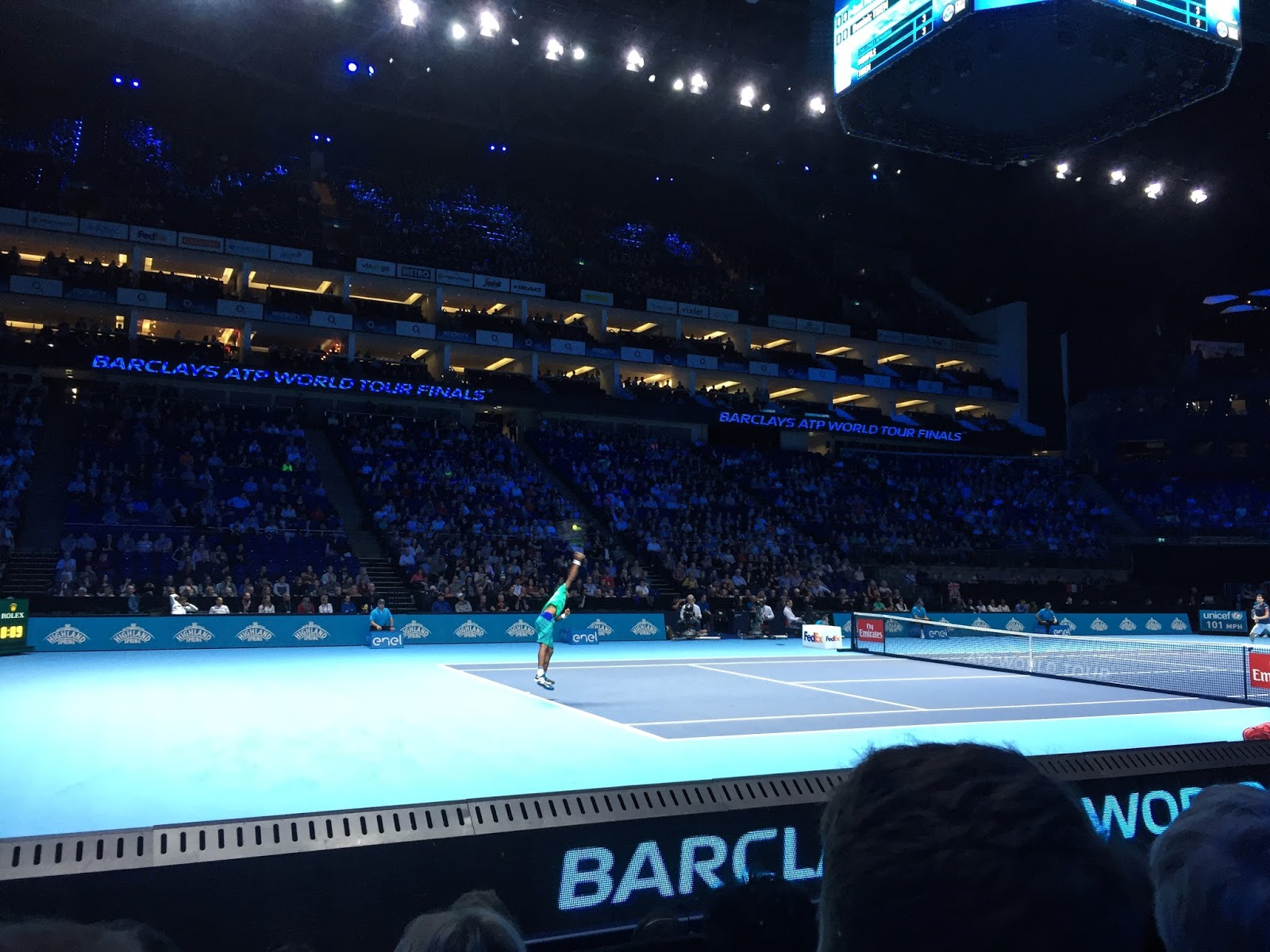 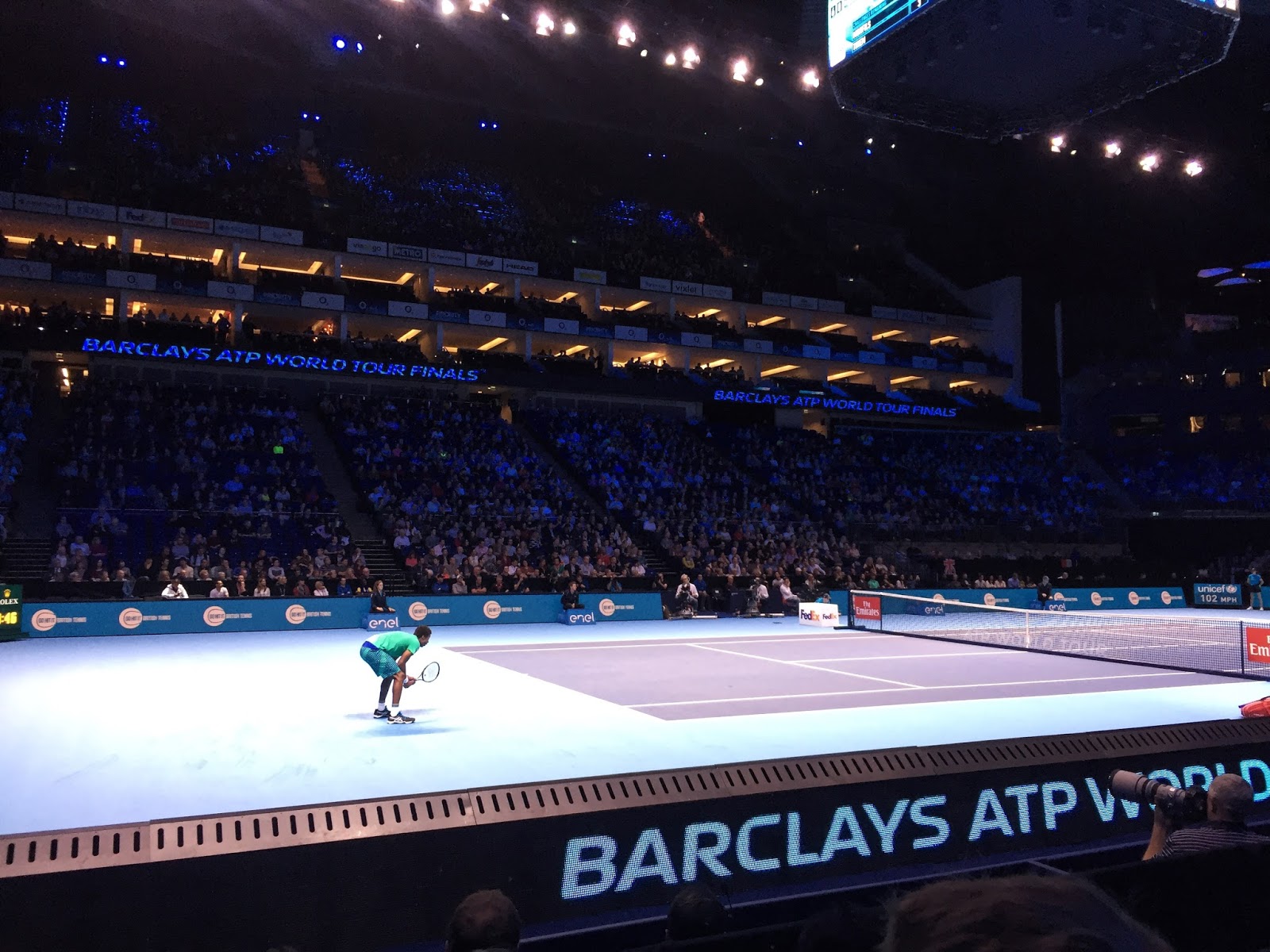 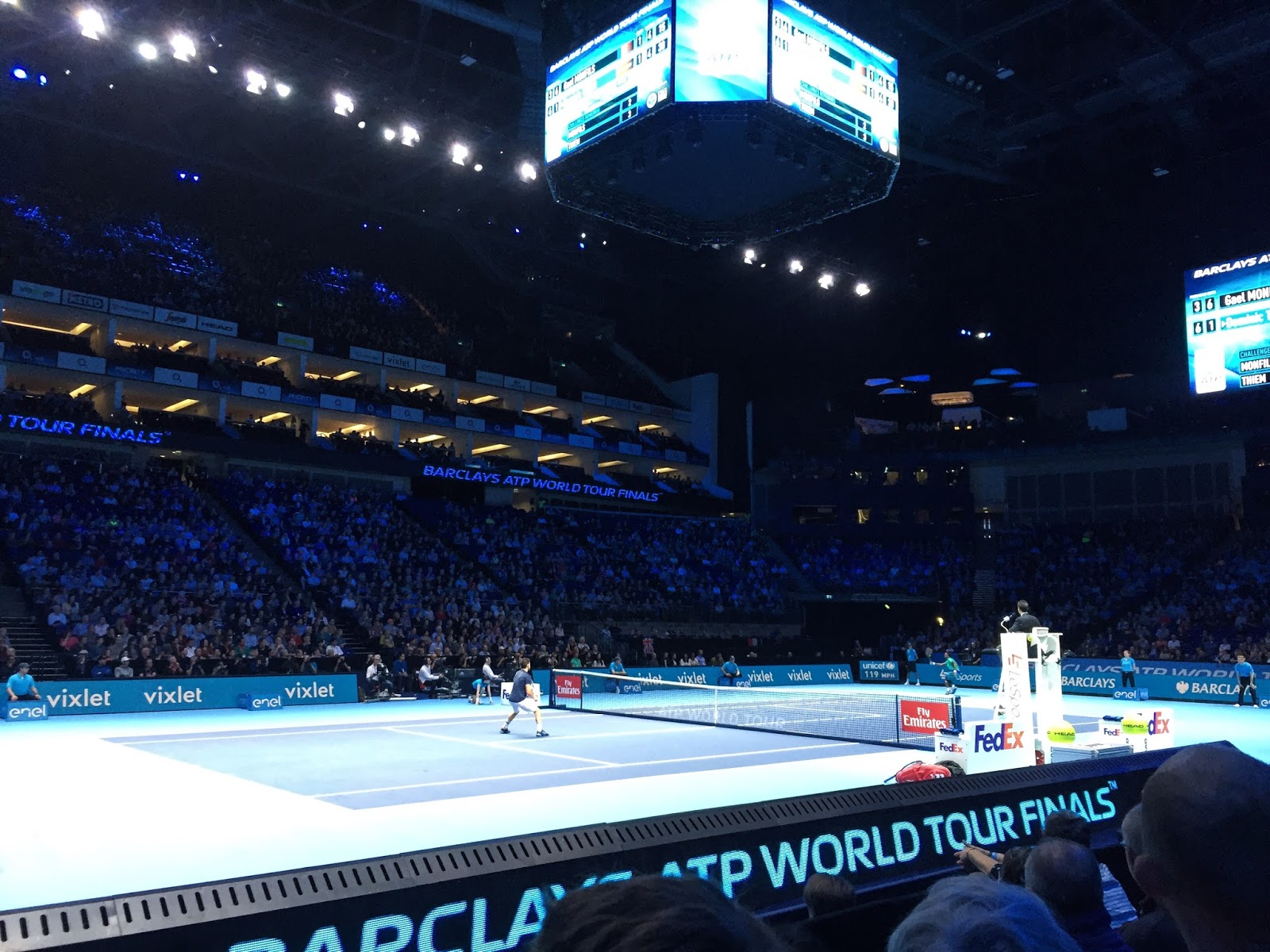 I didn’t want to leave the court at all and I definitely regretted not buying a whole day ticket or tickets for multiple sessions on different days. Now every time I’ve watched a match on TV since I went, which has been every match before I left for New York, I’ve had worse FOMO than I did last year. Can the next year go really fast so that the 2017 Tour Finals come around? Because come the time for the ticket release I’m gonna be buying up a good few sessions to ensure that I finally get to see Wawrinka play in person and have a seat as close as I did on Tuesday.

I can’t recommend going to the Barclays ATP World Tour Finals enough. Even if you’re not a tennis fan like myself, it’s a really, really, really fun day out. The venue and the music and the whole feel of it is amazing and you’ll have so much fun there. I know I did!

Now let’s pray both Murray and Wawrinka make it into the semis and Murray also ends the year as world number 1. Faves. 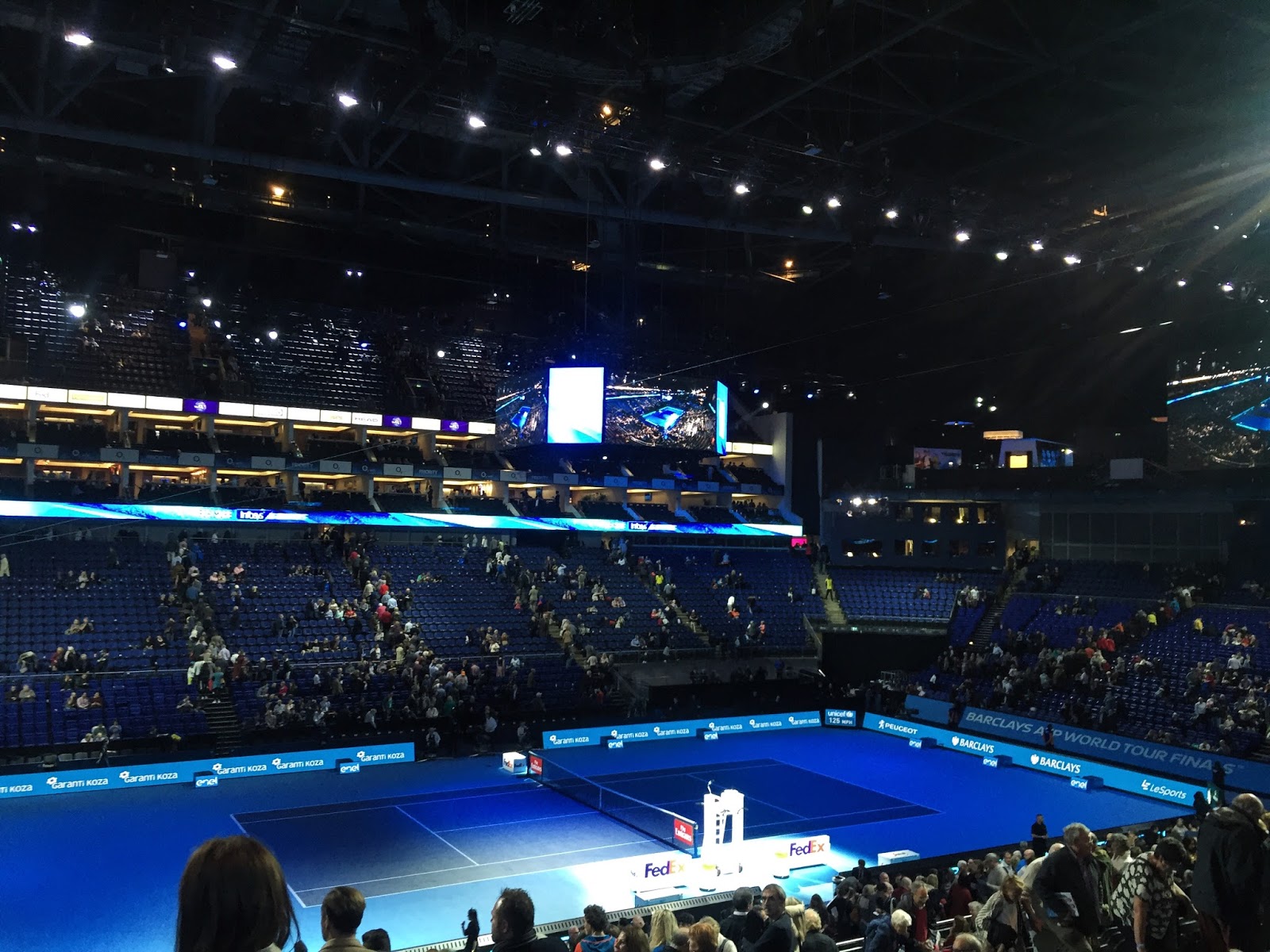 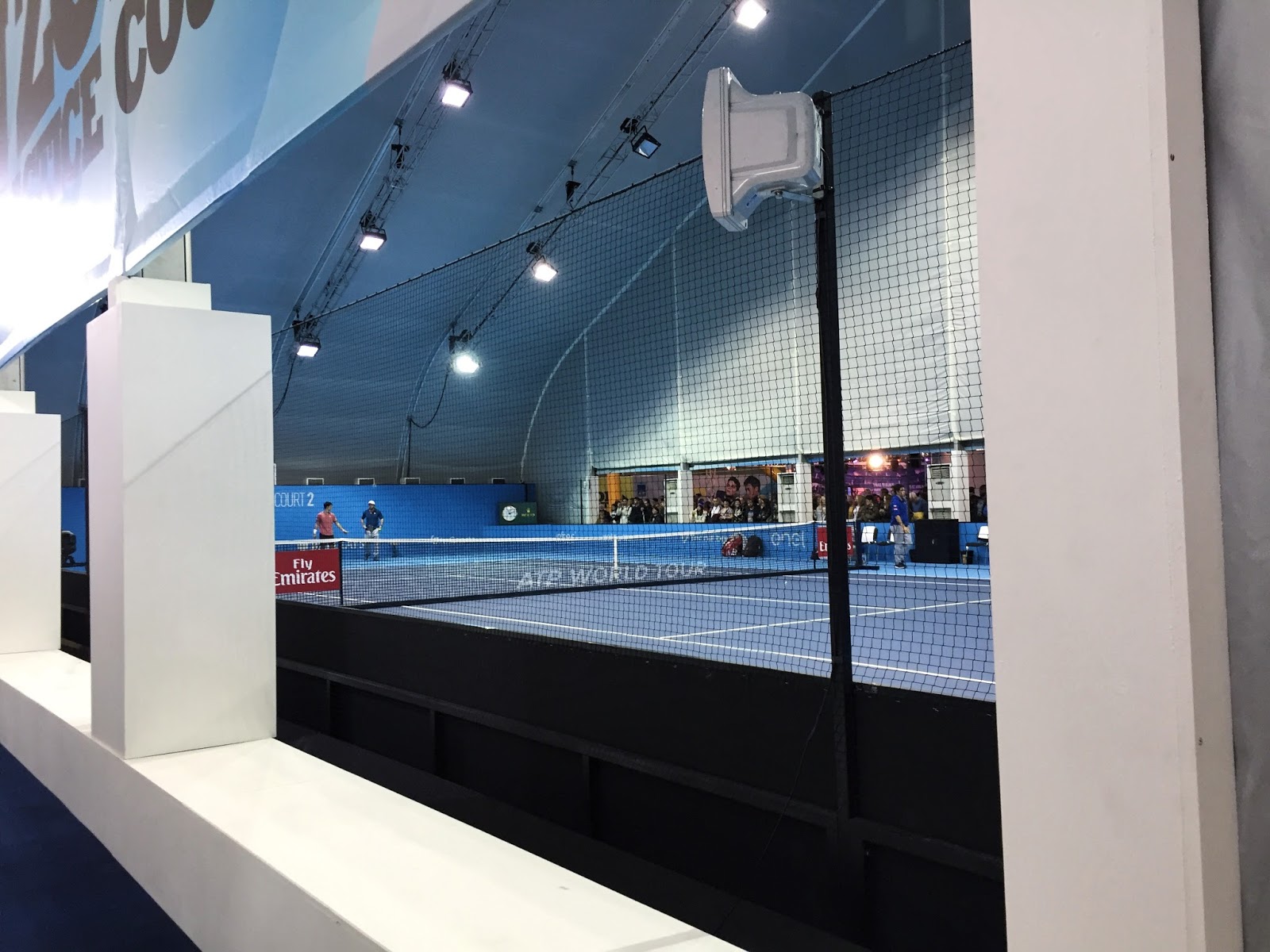 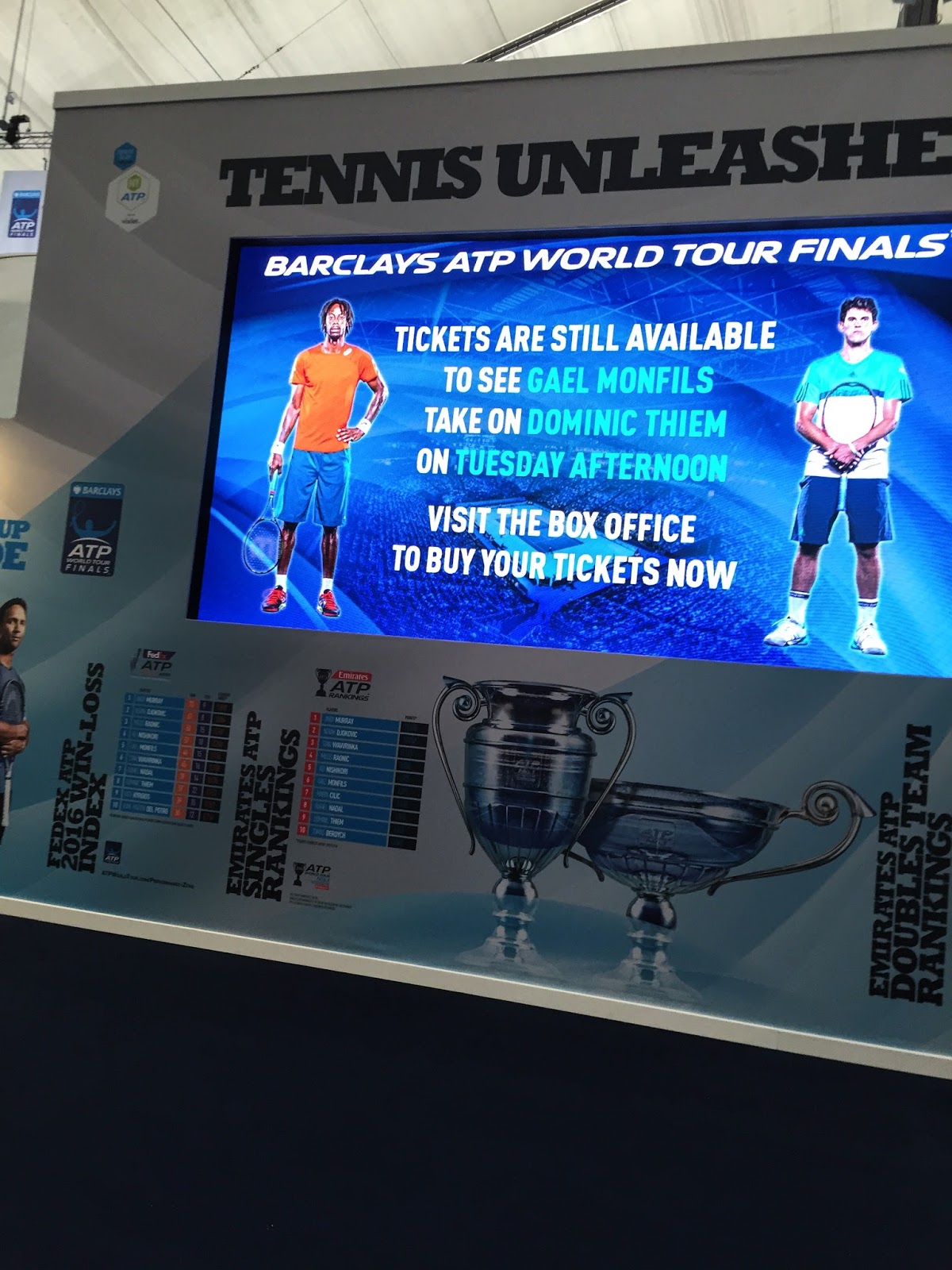