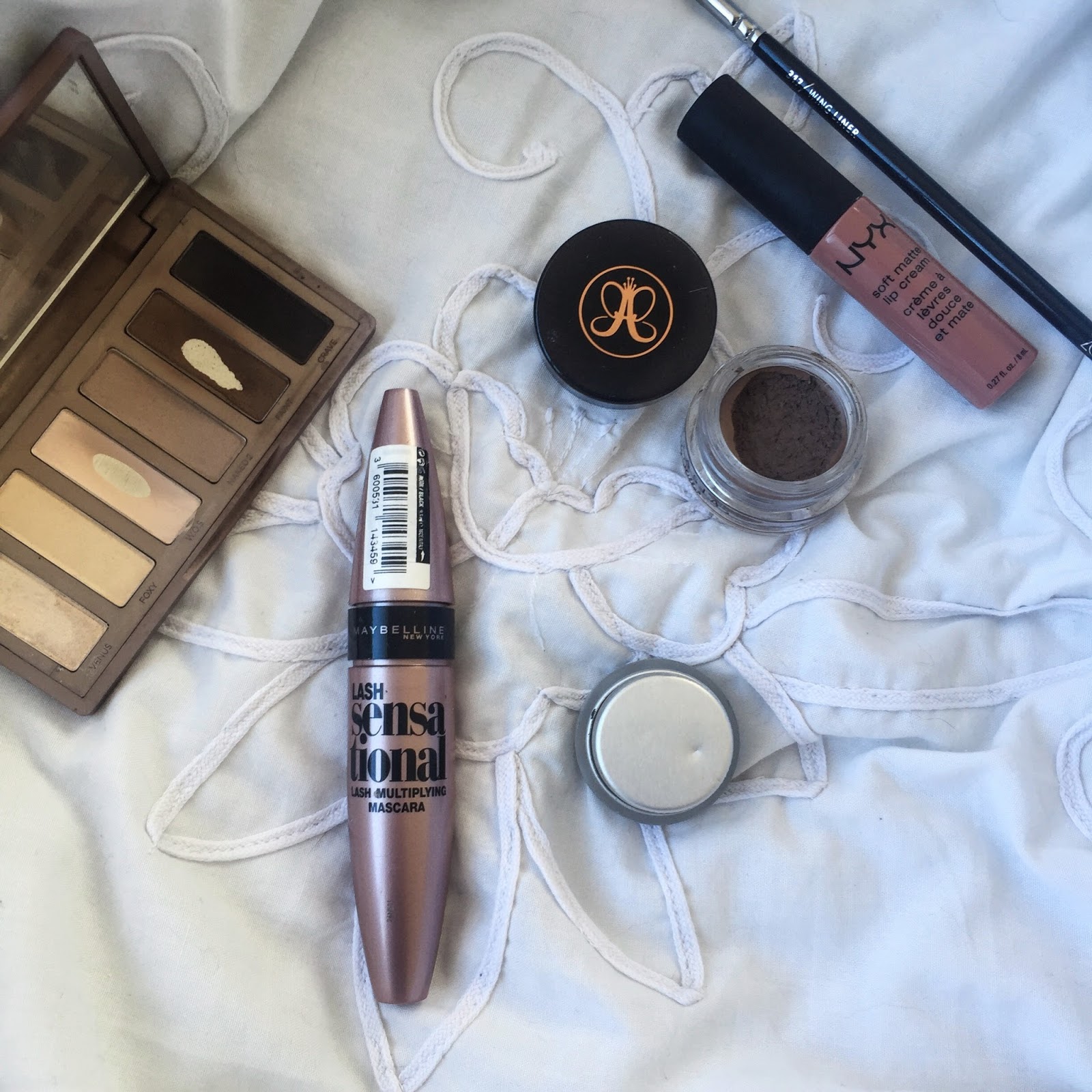 I haven’t spoken about beauty and makeup in a long time, especially my favourite makeup items. As payday finally arrived (and I’ve been working 24/7 baby 365 to earn extra dolla) it means I’ll probably splash out and get some all new makeup, I wanted to speak about my current makeup favourites before I get new items and these current faves get pushed aside. Everything here I’ve been using and wearing on my face pretty much daily this Summer, if not longer, and I’d recommend every single item in here if you don’t already have it.

This is probably my all time favourite Naked palette, despite it only having six shades. Although I definitely think the Ultimate Basics is going to overtake this one when it comes out, so I better get my love for this one out before the new one comes along to take its place in my heart and on my lids. I love matte shades, and the shades in this palette are so versatile and wearable, you can create a subtle daytime look or a more dramatic, smokey look with the black shade. This palette is the one I will always come back to no matter what and, even though there are only six shades, I can create a different look every time. Recently I’ve been using Faint in my crease, it’s one of my all time fave crease colours, Naked 2 allover the lid and Foxy on my browbone, then if I’m feeling ~snazzy~ I’ll add a glitter shade from another palette allover my lid. I’m just inlove with this palette and always will be, and I’m way too excited about the new Ultimate Basics coming out soon.

The ultimate combo for on fleek liner. I don’t know what I was doing with my life before either of these came into it but whatever I was doing, I was doing it with ugly af eyeliner. I couldn’t use one of these products without the other, they’re the perfect little dream team that make doing your eyeliner the easiest thing ever. I’ve had such a love hate relationship with all my eyeliners in the past, they started out fine but went awful after a couple of weeks when they’d dry up way too soon. This is completely avoided by having a gel pot of liner instead of some form of pen or felt tip. I was so scared of trying gel liner in a pot for a long time because I thought it’d be so easy to mess up but it’s totally the opposite. This brush pretty much makes your wing for you and the liner itself is jet black and stays on for hours.

I remember trying this shade out back when we finally got NYX around May and it looked atrocious on me. Get away. Then, in the middle of July I went on holiday and when I came back I swatched this again and it actually suited me pretty well. Even though my tan has faded a bit since, this still works fine on me and it’s been my go-to lip colour all Summer. It’s perfect for when I want a more neutral lip rather than something with a slight pink tone like the SMLC in Stockholm.

I’ve actually been mentioning this quite a lot since last Autumn but I want to again because it genuinely amazes me. Before using this, I’d always been the girl who went for more high end brands when it came to mascara. I’d sworn by Benefit They’re Real since I was thirteen, I’d saved up my money last Summer before I had a job to be able to buy YSL Babydoll, but now I know that I can get a mascara that is equally as good, if not better, from the drugstore. I can’t fault this mascara, it gives both volume and length without making your eyelashes clumpy, and I’m comfortable wearing it without eyeliner. Will I still buy and try other high end mascaras that I’ve loved in the past or have never used but want to see what their hype is all about? Yes. But will I still come back to this one and repurchase it every single time it runs out because it doesn’t even cost that much? Definitely. Though I tried that new version that has some kind of oil in it, the one with matte black packaging, and it was awful. The original is the only one you need, it can’t be improved, so make sure that if you want to try this mascara out, you try out the OG.

For some reason, after this became really big last year I refused to buy it in favour of the MAC Gelcreme version, and I don’t know why I was so delusional. I hate doing the thing of ordering a shade online that I haven’t been able to try out in person because I find it so hard to match everything – foundation shades, eyebrow colour, lipstick tones that will suit me. I hated the last few months of using my MAC version, probably because I had the blonde shade to match my hair when my eyebrows are super dark brown. I now have the soft brown shade in the Anastasia dipbrow and it’s the perfect balance between my light hair and dark brows, it’s not too dark that it’s harsh against my hair but it’s not too light that it blends into my actual skintone. The pomade itself applies beautifully and the excess left on your eyebrow brush doesn’t dry rock hard making it impossible to wash off. If you preconceive that this must be overhyped and just like any other brow pomade on the market, you need to try it to realise that, like me, you were probably wrong.

Which makeup items have been your faves recently? Let me know!