I genuinely wrote this at the end of July and it’s only showing its face now. Soz. Just thought I’d give some context incase any part of the written content seems a bit outdated.

I never had a style icon up until about two years ago. I had places I’d go to get inspiration but I could never set on one sole person to label as my style icon, especially because one day I’ll be wanting to pull off the type of aesthetic The Weeknd has even though I am really not cool enough and never ever will be, and another day I’ll be channelling my inner Blair Waldorf (tbh I’m always channelling Queen B, just not always style wise).

Now if you ask me who my style icon is, I can give you my answer in a split second. Kim Sears Murray. Are we even surprised? She’s tennis player Andy Murray’s wife, she’s an artist and she happens to be from East Sussex just like ya girl over here. With Muzza being a pretty big deal in Britain – ykno, former world number one, three time Slam winner including two Wimbledon titles, two time Olympic gold medalist, member of the elite ‘big four’ in the men’s tennis world, the usual – Kim also catches the media’s eye, especially when it comes to what she’s wearing and especially when it’s at SW19.

Whilst I can easily tell you in a heartbeat that Kim is the one person who has earned the title of style icon in my eyes, I can’t tell you that I spend every day of my life dressing anything remotely like her. Nine times out of ten I will be wearing the most anti-Kim outfit ever, but I can’t think of another soul in the world who I’d deem my style icon.

And this brings me onto the question I’m out here tryna answer – what if my style icon is someone I dress nothing like?

A little while ago the insanely talented Chloe Plumstead (who often gives me so much subconscious inspo because she gets me thinking about so many different things) wrote a blog post on personal style and whether it even matters. Just your standard 11/10 piece from her. It’s something I’ve always related to, and it was nice seeing someone else articulate it when you’ve been struggling to.

When this blog was in its early years (side note: Timehop let me know that a few weeks ago was THREE WHOLE YEARS since I started this blog and wrote my first post on it, madness, though I never took it seriously until late 2017 so I don’t count anything prior) around 2016 I drafted a post about ‘how to find your personal style’ but got as far as the intro and some headings that would be the tips. The truth is, I had zero clue whether or not I’d even found mine. In fact, I wrote in that post that I didn’t have a style icon because at that point I didn’t yet. And now when I look back, and even when I look at me now, I don’t think I had or that I’ve even now got a definitive personal style because my tastes are so ridiculously varied, I would not be able to find a word or a person other than myself to sum up my personal style because I can’t put it in one box like that. Kim may be my style icon but she is absolutely nowhere near an accurate representation of my personal style. The point is, personal style was always something I struggled with so has always been something I’ve tried to write about for this blog but I’ve never been able to properly articulate it – probably because I struggle with the concept so much.

So, back to Kim. How can she be my style icon if I’m not dressing like her every single day, probably not even twice a week? I started deeming her my style icon around the US Open 2016 because every single night she sat in Andy’s box she would serve a look. And the day after, I’d be replicating the outfit she’d worn the night before as best as I could. Now, I’m not sure how Kim would describe her style but when I think Kim Sears I think I lots of pretty, conventionally girly Summer dresses, and a quick Google search would confirm this. This is absolutely not a bit of me every day. Don’t get me wrong, I love a pretty Summer dress but in moderation and usually of a more bodycon or slip dress style rather than your traditional English rose lace floral thing, and the latter seems to be much more Kim. I think I’d describe Kim’s style as the cool-girl Kate Middleton. There’s something about the way Kim wears those dresses that looks a bit edgy, and she also switches it up and comes out in more ~fashion it girl~ and ~model off duty~ type outfits sometimes. She also sometimes wears slogan jumpers to take the piss outta herself after being caught swearing at her husband’s opponent the match before, this is why I love the gal.

I think part of the association of traditional English rose lace floral dresses with Kim has to do with the fact that she gets the most media attention at Wimbledon, and Wimby is the place where everyone dresses like that. When Andy reached the Wimbledon final in 2012, Twitter came alive with ‘wow Andy Murray’s girlfriend is hot af‘, ‘why is Murray sad he lost when he has that fit girlfriend to go home to‘ type tweets, and the British media started talking about Kim’s looks every single day she went to watch him play at Wimbledon. They told us where her dresses were from, how to recreate her blowdry, where she buys her handbags. She became the classic British fashion icon, it wasn’t unlike the way everyone jumped on the Kate Middleton and now Meghan Markle bandwagons. Her most iconic look has definitely been the mint green Victoria Beckham dress she wore when her man finally lifted the Wimbledon trophy for the first time in 2013. When she was at her peak British media attention, all Wimbledons from 2012-2016, this type of dress was her Summer uniform.

I do love her Summer dresses and her ability to make something that should look frumpy look the most far removed thing from frumpy ever, but it’s the other looks she wears that I much prefer. The outfit that earned her the right to be my style icon (lol) was this from the 2016 US Open. The funny thing is I hate the skirt more than anything, but it was the look of her sitting in this big, boxy, oversized white shirt that seemed so effortless and off duty and yeah-I-just-threw-this-on-without-caring-but-somehow-came-out-looking-like-a-model. The next day I wore the outfit from this blog post as my recreation of Kim’s look, sans ugly skirt, and now it’s an outfit I forever and always go back to, wearing it multiple times every Summer since.

Ok, a brief history on the style of Kim Sears Murray over (put away your pencils and notebooks kids! x) I think you now get the picture. Look at those pics of Kim, look at my Instagram – we dress nothing alike. So how on earth am I telling the world that she’s my style icon and meticulously keeping up to date with every single thing she wears every time she goes to watch Andy play tennis when I’m not actually dressing like her? Well, personal style is a funny thing.

The link between personal style and identity is a close one, and is kinda a big deal. Now I’m sat here writing this and really thinking about it, maybe Kim is my style icon because I like the way she makes classic, girly pieces look edgy and edgy pieces look pretty and feminine. Maybe its because, as a result of this, she has the balance of the girly : edgy ratio down. Maybe it’s because I like the way she is – swearing at Murray’s opponent and then showing up in a warning explicit content jumper to laugh at herself for her lil sweary outburst in the match before (can deffo relate to the taking the piss out of yourself thing, my life is one big sarcastic kiss). There are probably things I see in Kim and the way she presents herself that I either already see in myself / my style or that I want to see in myself / my style. And that’s what makes her my style icon. There’s a form of shared identity through the expression of personal style there, and to me that’s what makes someone a style icon. Not dressing the exact same as them all the time.

Nobody in the world is one dimensional. Nobody is out here drinking water and eating bread every day, watching the same one TV show forever, and wearing the same white t shirt and blue jeans every single day of their life ever. This isn’t The Simpsons, we change our outfits pretty much daily. It doesn’t even have to be that deep. If one day you pick up a Kim-at-Wimbledon-esque dress and decide to wear it, then go back to your normal slogan-tshirts-everyday self the next day, you still liked the dress. That dress resonated with you that day. If you thought wow this is cute, I’ll wear this today, it was a reflection of your thought process that day. Even if it was only for the ten hours that you wore it, it was still a part of your identity for that ten hours. It doesn’t have to ~represent something deep and meaningful~ about your life and your thoughts, that was just your identity for ten hours that day, and that’s not that deep (queue photo of that guy in water up to his neck captioned it’s not that deep). 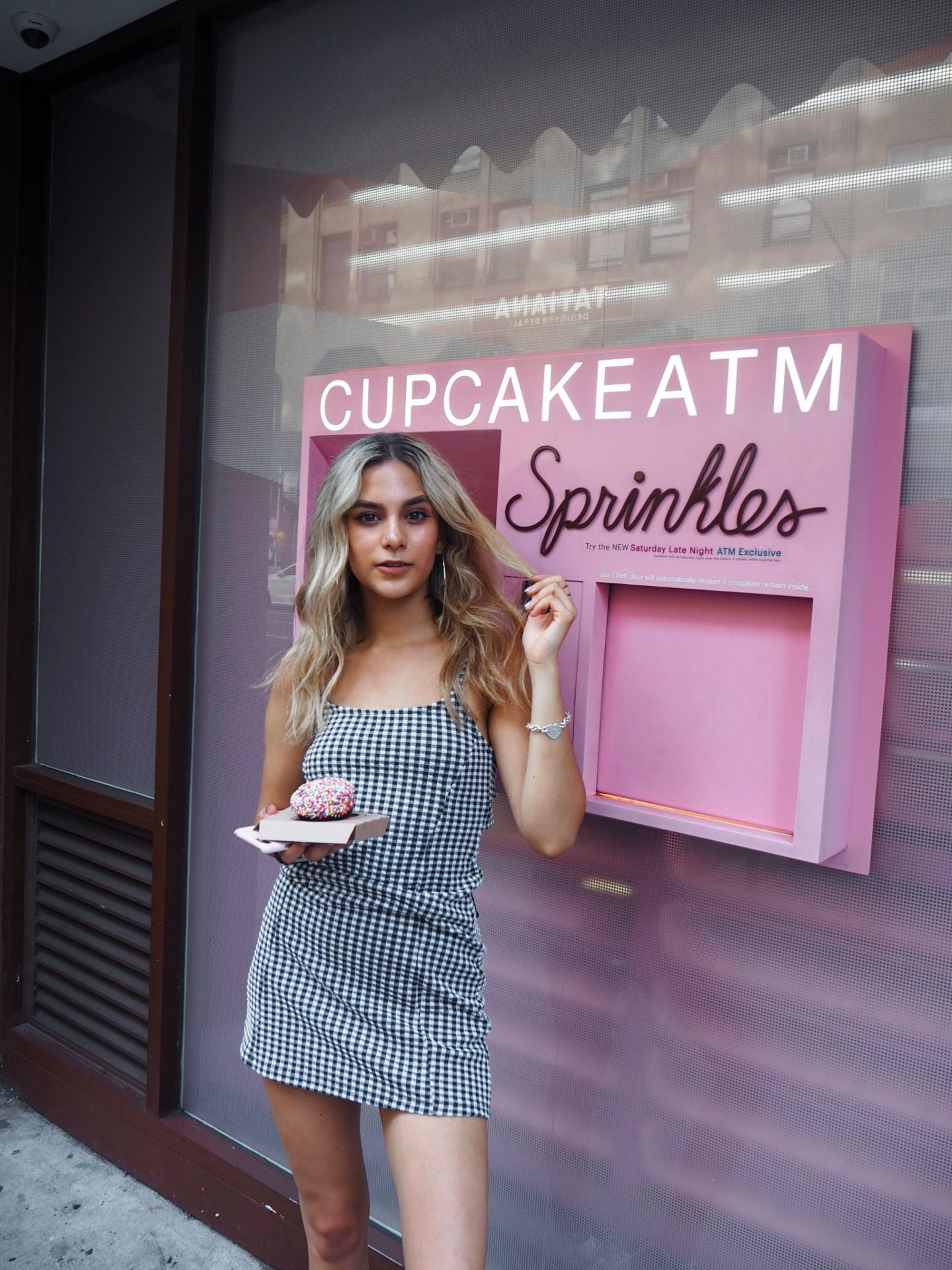 Some days I want to be Kim Sears, some days I want to be The Weeknd, some days I want to be your typical all-Topshop-everything girl on Instagram. My personal style varies from typical Brighton indie girl (ok, or a cheap version because when you compare my version of that to the other people who genuinely dress like that, I still look way too ~mainstream~) to preppy Blair Waldorf / Cher from Clueless to wearing all the trends to off-duty vibes to one of my all time favourite looks – looking like you’re wearing lingerie but you’re really wearing clothes, or just disguising your lingerie as clothes.

So no, I don’t feel like I have one set personal style. No, I don’t feel like there’s anything wrong with me deeming someone my style icon even if I rarely dress like them. I could never describe my personal style as one definitive thing to you, only the way I just described it in the above paragraph. But in terms of personal style and identity? The amount of times I have friends show me something in a shop that they think is a bit of me is ridiculous, and they’re always 100% right. And half the time it’s something I’ve already had open on my laptop and have been considering buying for weeks. I’m safe in the knowledge that even if I rotate between twenty different styles, people who know me can still easily, accurately identify something that is the literal embodiment of me (this dress in blue included!), and that makes me a v happy gal.

S/O Qweeeen Kim Sears Murray for being the inspiration behind this post and behind my personal style. I know you have two kids but like please for the love of god make an Instagram account where you show your outfits every day, I need all the inspo.